Built via donations to support cancer research, this 1979 Fox Mustang could be yours 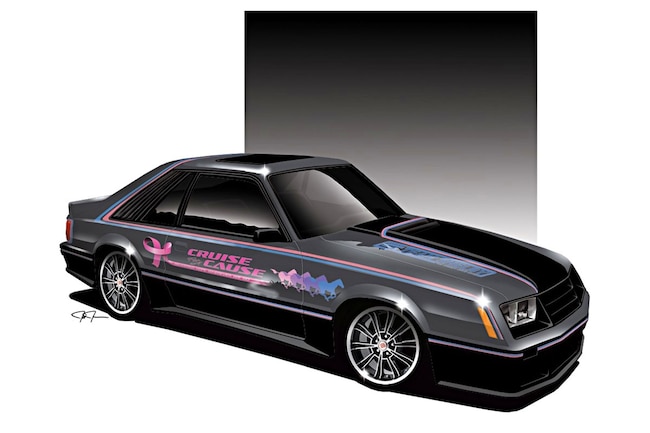 If you’ve been to any of the major Mustang events, such as Mustang Week, Carlisle Ford Nationals, and so forth, you’ve no doubt seen Dan Neve and his Cruise for a Cause [www.cruise4acause.org] Mustang. Perhaps you weren’t sure what this whole “cruise” thing was about, other than it obviously being related to cancer since the logo incorporates the infamous pink ribbon for awareness. If you’ve never taken the time to speak with Dan at one of these events you really should hear his story of how his wife and mother were both diagnosed with breast cancer less than two months apart back in 2010. Already shopping for a 2010 Ford Shelby GT500 at the time, Dan came up with the idea to use the Shelby to raise awareness of this terrible disease and possibly help fund cancer research. Cruise for a Cause, a 501c3 non-profit, was born.

That first year Dan hit his goal of raising $10,000 for cancer research via event attendance where he’d sell Cruise for a Cause merchandise and offer charity rides at the event venue’s track—events like SVT Superfest, Mustang Week, and more. Since 2010 Dan has driven his 2010 Shelby GT500, 2015 Roush Stage 3, and his new 2019 Bullitt Mustang to 26 states and over 140,000 miles on weekends attending events. He has shared his story with literally hundreds of thousands of individuals, and as of this past year has donated $350,000 towards breast and prostate cancer research!

Like most Mustang enthusiasts Dan is a member of a Mustang club. In his case the Great Lakes Team Shelby club. The club’s officers and directors surprised Dan recently with the donation of a project Mustang to Cruise for a Cause. The 1979 Mustang Indy pace car was donated by club members Lance and Ellie Tarnutser. The Indy pace car will be rebuilt as a custom Cruise for a Cause Mustang, but unlike the three previous cars, you can actually own this one! Yep, once completed later this summer the ’79 pace car will be given to a winner of the Cruise for a Cause raffle. Tickets are $20 each, or six for $100 with 100 percent of the sales going to cancer research. The winning ticket will be announced at the Cruise for a Cause Fall Ford Fest in Wisconsin Dells, Wisconsin October 3-6, 2019.

Currently the Mustang is being worked on by a group of volunteer staff from the Team Shelby club at member Brandon Schilling’s home shop. Once metal work is done the Mustang will move to Art’s Body Shop in Marshfield, Wisconsin for final prep and paint. Thanks to the support of the following companies that have stepped up to date, including Modern Drive Line, Recaro Seats, Drake Automotive, BFGoodrich, Ford Performance, C&R Advanced Cooling Technology, Miller Welders, Arts Body shop, Dynacorn International, National Parts Depot, Gateway Classic Mustang, American Muscle, Brandon’s Farm Services, Odyssey Battery, BOXOusa, Race Ramps, and Shelby American, this ’79 Fox-body is going to be one special ride!

Naturally there are still a few items on Dan’s wish list, including wiring, exhaust bits, and paint materials, so if you or a company you work for can help out, or if you just want to provide a cash donation to help with the build of the car, reach out to Dan at cruiseforacausehope@gmail.com or call (715) 305-7986. Donations can be made directly on the Cruise for a Cause website as well at www.cruise4acause.org.

Dan’s three Cruise for a Cause Mustangs, which he affectionately refers to as The Three Horsemen. You’ve no doubt seen these on display or ripping around a track at major Ford events over the last nine years.
The ’79 Mustang Indy pace car that was donated to Cruise for a Cause had been sitting for a length of time and was somewhat of a “barn find” as well. We can’t wait to see the finished product this summer!
Currently the body has been stripped and all rust and other metal repairs are being tackled, such as the replacement of the floorpan with this new one-piece stamping from Dynacorn.
A factory V-8 car with power steering, power brakes, and air conditioning, we’re sure as this Mustang goes back together all of these systems will be thoroughly updated to make a great driving car with all the creature comforts.
Dan loves handing out donation checks to various cancer research organizations, such as this $80,000 check to the Marshfield Clinic Health System Foundation.