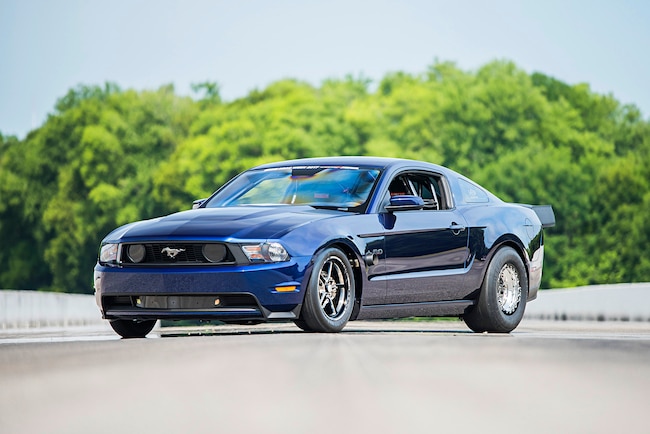 When the Coyote prowled onto the scene, it set a whole new standard for performance from a Ford 5.0-liter V8 engine. As with all other platforms that preceded it, this engine family, and the 2011-and-newer Mustangs that were blessed to have it howling underhood, inspired many owners to aggressively modify their pony cars right off the dealer lot.

Obviously inspired by the then-new engine platform, Ryan Hargett added a new Mustang to his stable, but it didn’t rack up a lot of mods or miles for the first few years. He is busy running a shop, and he has other fast cars vying for his attention, including a Jerry Bickell-built, Brand X Pro Mod racer.

“To be honest this is only my second Mustang personally, but I have owned fast street cars and race cars my entire life,” Ryan said.

Ryan Hargett’s Kona Blue 2011 Mustang GT is all about the strip not the stance, but you have to admit it looks beautiful riding low on Weld Alumastars wrapped in Mickey Thompson rubber. BMR Suspension bits do the work in front, while Racecraft bits handle the traction out back. Afco adjustable dampers keep both ends under control.

A Kona Blue S197 is a beautiful sight in any configuration, it didn’t take on its current aggressive form until he decided to live out his dream of competing in the demanding yet rewarding ranks of Hot Rod Drag Week.

“I purchased the car new in 2011 and when the car was about four years old and only had 5,000 miles on it, we decided to build the car. It took about two years to build the car from start to finish,” Ryan explained.

If you aren’t familiar with the week of drag, you probably need to get out more. This event challenges contestants and their vehicles to a drive their vehicles from track to track over six days, six towns, and 1,000 miles. These cars compete in variety of classes on the dragstrip, and after making their runs, they travel along a prescribed route to the next track and do it all over again. It is a glorious grind.

Though it bears the fangs of its exhaust through the sides of the front fenders, this S197 isn’t too different than they were when the car rolled out of Flat Rock. Even the hood is stock, but this Mustang does wear an MMR wing out back to provide some downforce during those 7-second passes.

Suffice it to say, this is a challenging endeavor. It stresses not only the driver’s stamina, but the fortitude of each car’s combination. Despite its challenges, those who compete in the event come away raving about how much fun they have in the process. For Ryan, however, the first crack at living this dream far exceeded his expectations.

“We ran Drag Week in 2017 and finished second in our class. We went to Drag Week without even making a full quarter-mile run under power,” he enthused. “It’s always been a bucket-list thing for me just to enter Drag Week and finish.”

In order to withstand the rigors of the week, Ryan needed a robust combination. Fortunately, he also happens to run his own shop, Hargett Automotive & Performance. There he performs everything from bolt-on upgrades to full race car builds, and his own project falls somewhere in between.

This engine compartment is the embodiment of mean and clean. From the aggressive twin-turbo system and sleek upper intake to the Holley coil-on plug ignition and custom hoses, this Coyote combo is all business. A Holley Dominator EFI system makes sure it runs to its potential and a Fore Innovations fuel system pairs with Injector Dynamics ID2000 fuel injectors to feed the beast.

The centerpiece of the build is, of course, a Coyote 5.0-liter engine based on a stock block topped by factory CNC-ported Boss 302 cylinder heads topped by a quartet of Comp Cams bumpsticks ground to make the most of boost. Bridging those heads is a Roush Performance intercooled lower manifold crowned by a custom intake wearing a massive monoblade throttle-body.

Feeding that robust 5.0-liter combo controlled by a Holley Dominator EFI system is a twin-turbo system based on a pair of Precision 76/75 Gen 2 turbos that provide enough boost to propel this streetable stallion to the kind of quarter-mile elapsed times that were once reserved for race cars. During Drag Week, he clicked off as string of eights, but the car has gotten quicker since.

“We were very happy we just wanted to finish our first year and to finish second we were ecstatic!” Ryan said. “The only thing we did not accomplish was we wanted to run a 7-second pass.”

Tin Solider Race Cars created a 25.3-certified cage to keep Ryan safe on those single-digit passes. He rides strapped into a Kirkey racing seat by Stroud harness belts. He keeps the S197 straight with a Sparco wheel and handles the shifts via an M&M shifter. Tracking all the engine vitals is easy thanks to the Holley digital dash cleanly mounted on a carbon fiber panel.

To withstand single-digit performance, the Coyote’s power routes through an RPM Turbo 400 filled with the good stuff from ATI and Neal Chance. It pumps the power to a Strange-fortified 9-inch through a PST carbon-fiber driveshaft. It rides on Welds and Mickeys, and still has respectable manners on the mean streets as well.

“It has good street manners for a 7-second car. The car drives super straight and smooth at the track,” Ryan said. “It still has the factory A/C and factory fuel tank under the car,” he said. “In 2018 we finally broke into the sevens with several 7.80s at 176 mph.” Yeah, you read that right. This is another legit street Mustang that runs in the sevens thanks to a turbocharged Coyote combo.

Despite running so impressively and kicking Drag Week off his bucket list with this machine, Ryan is not content to let this Coyote get complacent. He is yet again building the car up looking to sharpen its traction and enhance its durability. “We are working on improving our 60-foot times and building a new engine to handle some serious boost,” Ryan added. “Yes, it’s still a Coyote.”

That is music to our ears, and it should be fun to see how much further he can push this car, which is still a low-mileage machine with over 8,000 miles on the clock. 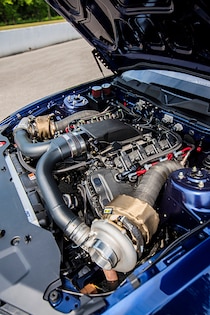