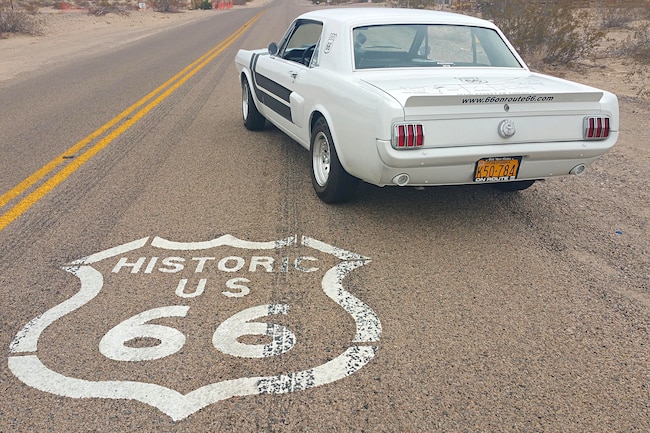 Route 66. The Mother Road. Every car enthusiast’s bucket list item, yet how many really see to it that this bucket list line item is indeed checked off? Sure, many of us have driven a part of it, and some probably even drive a portion every day if you live near it. We’re talking start to finish. From Chicago, Illinois to Santa Monica, California, covering some 2,400 miles, it’s a trip few get to take, yet so many should.

Jim Diorio, of Pittsburg, Pennsylvania, is one of those that wanted to accomplish driving the complete Route 66 and set out to do it in 2018. However, he didn’t have a classic car to pay homage to the drive. In July 2017 he found a ’66 Mustang hardtop that was on its way to the salvage yard and brought it home for $400. Over the course of six months Jim rebuilt the car. February 2018 he wrapped the build by installing the custom Route 66 graphics and turned the key for the first drive.

After a few months of weeding out new build issues and putting some local car show/cruise in miles on the ’66 Jim set out for Chicago from his home in Pennsylvania and drove the complete Route 66 in September of 2018 as planned. Jim put roughly 3,500 miles on his Mustang crossing our great country on Route 66 from beginning to end and had absolutely zero issues with his Mustang on the drive. Though the trip is in the books for him, you can relive his build and the drive itself by visiting his blog at www.66onroute66.com.