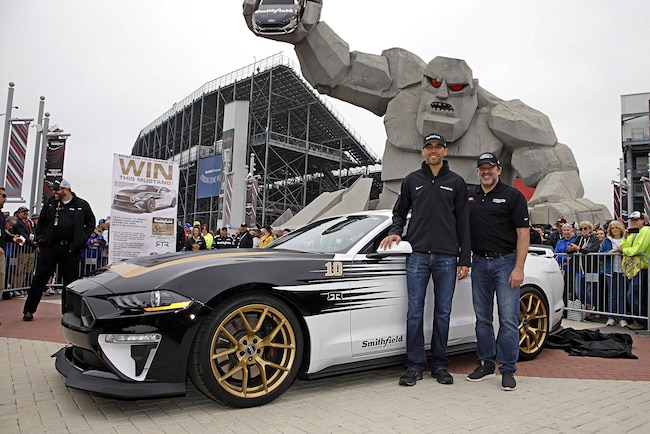 We’ve never won a thing in our life, but that doesn’t keep us from trying. We registered to win Smithfield’s 2018 Mustang RTR Spec 3, but it turns out Jerome Sanders had all the luck this time, taking the car home after the final race of the 2018 season at Homestead-Miami Speedway. However, we’re not even mad because Mr. Sanders is a retired Army Sergeant from Linwood, Pennsylvania, and we trust the ‘Smoke Machine’ will be put to good use on PA’s windy roads.

To refresh your memory, the ‘Smoke Machine’ was a collaboration between Stewart-Haas Racing and Smithfield Foods, and under the direction of Tony ‘Smoke’ Stewart, who was known for smoking his competition, and his tires after each win. “It was a really cool moment when I got to hand over the keys for the Smithfield Smoke Machine to our winner, Mr. Sanders, during Ford Championship Weekend,” Stewart said. “RTR, Vaughn Gittin Jr., Ford Performance and my crew back at Stewart-Haas Racing built an unbelievable, one-of-a-kind performance car.”

“Our sweepstakes and project build celebrate the love we all share for ‘making smoke’ on the grill and on the racetrack,” said Chris Braselton, manager of Smithfield Foods’ NASCAR program. “We were thrilled to welcome Mr. Sanders as Smithfield’s guest for the Championship race weekend in and introduce him as our grand prize winner.”

For his part, Mr. Sanders says, “I feel lucky and blessed, and can’t wait to get my new Smithfield Smoke Machine Mustang back home, so I can give the keys and this magnificent car to my wife as her early Christmas present. And of course, I’m looking forward to riding with her as she cruises the roads in Pennsylvania.”

Knowing PA roads, we’re sure the Sanders will put the RTR Spec 3 through its paces on a regular basis.

Smithfield giveaway winner Jerome Sanders showed up to Homestead-Miami Speedway to accept the keys from Stewart-Haas driver Aric Almirola. The ‘Smoke Machine’ is a 2018 Mustang RTR Spec 3 featuring a Ford Performance/Roush supercharger, a full RTR suspension and exhaust, exclusive Smithfield/Stewart-Haas graphics, and a custom set of RTR/Tech 5 20-inch wheels with Goodyear tires. “It was an honor to take Mr. Sanders for a few hot laps on the racetrack in his new Smithfield Smoke Machine Mustang here at the Speedway,” Almirola said. “I’m sure it was an experience he won’t soon forget!”