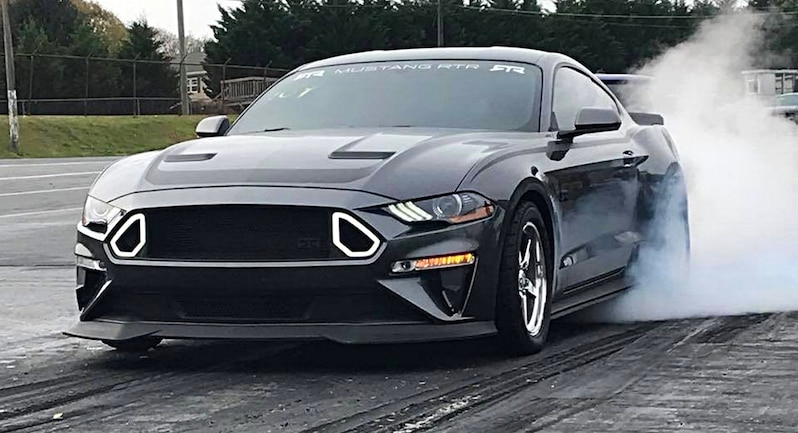 Back in the Fox days, one of our elapsed time goals was to run in the 12s, naturally aspirated. We needed lightweight wheels and drag tires, a shifter, a big gear, a few suspension modifications, intake and exhaust modifications, and a driver mod. If we had all those things, 12s were very reachable. In some cases, depending on vehicle weight, 11s were within reach. In all cases, though, we needed cool fall air, and it wouldn’t hurt to have Cecil County Dragway at our disposal, either. These days, a stock Mustang GT runs 12s, and 11s are just a couple mods away. Therefore, with a naturally aspirated combination, 10s are the goal. With more horsepower, a rubber band RPM range, and a 10-speed transmission, technology has made these elapsed times way more reachable.

Case in point, Revolution Automotive was recently able to get its 2018 Mustang GT RTR Spec 2 into the 10s thanks to carefully chosen modifications mixed with plenty of testing to see what works and what doesn’t. To start, RevAuto’s Adam Browne chose Jet-Hot coated Kooks 1 ¾-inch long-tube headers through Turn 14 Distribution, but kept the factory cat-back with intact resonators. On the intake side, RevAuto added a factory GT350/Bullitt air intake using a silicone adapter to mate it to the stock 2018 throttle body. E85 has been the car’s chosen fuel for a while now, so that is one thing that hasn’t changed in the car.

On the drivetrain/suspension side of things, RevAuto added a Driveshaft Shop aluminum driveshaft, a GT350 driver side axle shaft, a Performance Pack cast iron center section with 3.73 gears, followed up by a complete RTR Tactical suspension. Weld 17x4 ½ wheels are up front, while 17x10 examples live out back shod with Mickey Thompson ET Street S/S radials. It goes without saying that Browne and RevAuto crew manipulated the tune for all these mods to work together for good, or evil, depending on how you look at it, and the car is equally at home on the street as it is at the track.

RevAuto didn’t go the full weight reduction route, but Adam Browne does admit to watching his waistline. However, the car still weighs in 3,850 pounds with Browne at the wheel. After testing, testing, and more testing, the RevAuto crew broke into the 10s over the weekend at Cecil County Dragway in Rising Sun, Maryland with a 10.98 at almost 129 mph. Browne and the RevAuto crew aren’t finished, though. More suspension tuning and upgrades are planned, as well as a look at ways to decrease rotating weight. We’re sure Browne and the crew will have an update on quicker times by spring.

How good are these 2018s? How about a 10.98 at almost 129 mph out of a largely stock 2018 A10 car?! Minor intake and exhaust mods, followed up with a few drivetrain mods, the addition of E85 and a custom tune, and you’re in the 10s. RevAuto’s Adam Browne was at the helm for the 10-second runs, at a race weight of 3,850 pounds. Browne is all smiles after breaking into the 10s.
How much power does the car make, you ask? On E85 with the stock air intake it made 457 horsepower at the wheels, but with the factory GT350/Bullitt air intake, horsepower rose to 468, or enough to propel the car into the 10-second zone.