Hump Day Halloween is in the books at SEMA 2018 #MTSEMA18

Hump Day Halloween is in the books at SEMA 2018 #MTSEMA18 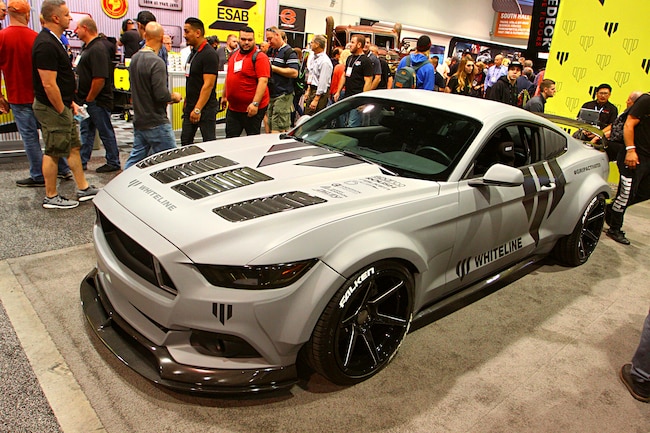 When you work the SEMA show, days go by like a flash, and at the end of the day, your legs feel like you ran a marathon. Your feet are sore, your knees hurt, and if you’re old like us, at the end of the day you just want to sit down. For Wednesday, we spent the morning doing a FaceBook Live and an Instagram Live video at Factory Five Racing, posting a few Instagram stories, and finishing up Tuesday’s work in the media center. After having a lunch meeting with the good folks at Ford Performance, we did a few more Instagram stories while devouring a wrap and chips; then we went inside in search of new parts. We stopped by Weld Racing, Fuelab, USshift, Anderson Composites, among others. Weld Racing had its new S72, which is available in a front runner and in rear sizes, a Full Throttle rear, and the new fully-polished S77. We have Welds on a few of our project cars, so you know we love anything new from them, and this year’s SEMA has us wanting a new set of wheels.

Factory Five Racing is building one of its Type 65 coupes at SEMA, but the company also had one already built, and featuring a Ford Performance Aluminator A52XS crate engine. The Type 65 is compatible with a variety of Ford engines, but how can you go wrong with a 580 horsepower 5.2?! Uh, you can’t.
Fuelab is a company on the rise in the drag racing scene, and at SEMA the company had its new 484 series fuel pumps and H/E series brushless screw pump fuel surge tank systems. The 484 series in-tank fuel pumps covers applications from 625 horsepower to over 1,250 horsepower. The company’s fuel surge tanks are designed to keep a race car’s fuel system pressurized during hard acceleration, cornering, or during drag launches. Under these conditions there’s a chance of fuel starvation, but with a Fuelab surge tank system on board, that is a thing of the past.
Weld Racing has been a huge part of the Mustang aftermarket for years. Even back to the Fox days, every car had Welds on it. These days, the company is making it really easy to continue the trend with the new S72, Full Throttle (Seen here), and a new polished version of the S77. As you can see, the Full Throttle is available in a beadlock for street/strip applications. Did we mention we need new wheels for our Mustang?
Getting into the exterior part of the hobby, Anderson Composites is one of the companies responsible for taking Mustangs to the next level when it comes to aesthetics. Anderson’s full line of carbon fiber hoods, decklids, spoilers, grille components, rear diffusers, and the like allow Mustangs enthusiasts to truly personalize their cars.
USshift’s line of transmission controllers are available for a wide variety of Ford transmissions, including the 4R70W, 6R80, and coming soon, the 10R80. USshift’s Silver Bullet 2004 Mercury Grand Marquis serves as a test mule for its 10R80 transmission controller. USshift swapped out the Mercury’s original 4R70W for a 10R80 to science out the swap, and to get the 10R80 transmission controller ready for public consumption.
Going into the tunnel, USshift had its full line of transmission controllers at SEMA. These controllers allow you to adjust shift points, shift firmness, and torque converter operation. You can also use the controllers as a data logging tool to provide you feedback on your car’s performance. For 2018, USshift improved the controller-based interface to make it easier to use, with enhanced diagnostic capabilities, increased accuracy for shift timing, and a new Dyno Mode provides torque converter clutch control for more accurate performance tuning.
As Mustang enthusiasts, we ask a lot of our cars. We want them to be fast, comfortable, and handle the curves. That’s a lot, but the folks at QA1 has a product that should help satisfy our needs. QA1 bills its MOD series shocks as the first on-the-car revalvable shock on the market. With the company’s QuickTune Technology, you can revalve your Mustang’s shocks without removing them, and it can be done in a matter of minutes. This technology will truly allow you to turn your street car into a drag car with just a few minutes work.
These are just a few of the parts we’ve seen at SEMA catching our eye, but we also threw in some cool Fords to pique your interest, as well. With that, not to sound like Patriots Coach Bill Belichick, but we’re on to Thursday.

If you are looking to improve your Ford truck’s performance, aFe Power has many products aimed at doing exactly that. The company has cold air intakes, performance suspension components, and even this BladeRunner GT series intercooler for 2018-2019 F150 3.0L Power Strokes. This intercooler is 100 percent Tig-welded with 3/16-inch thick aluminum end tanks, a bar and plate core design, and billet aluminum factory-style inlet/outlet fittings. 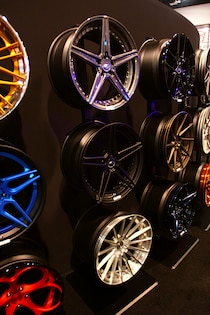