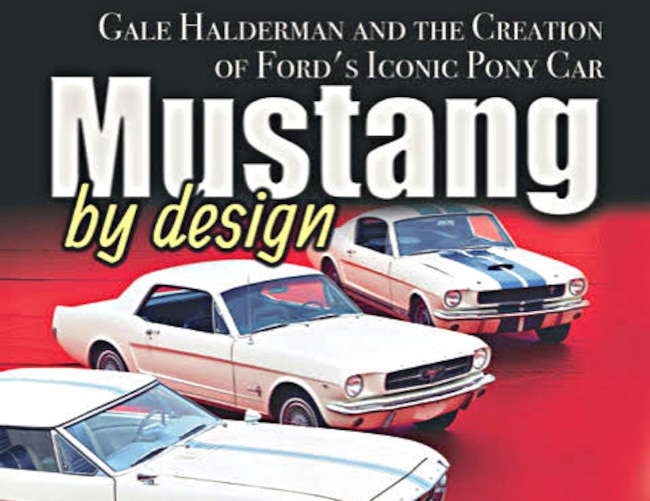 If there’s one subject that in the automotive genre that can be consider over-written, with the possible exception of Ferrari and Porsche, it’s our favorite Pony Car, Ford’s iconic Mustang. For more than five decades it has been the rolling definition of a Pony Car. Because it has been so comprehensively covered, it’s almost impossible for automotive writers, journalists, and photographers to bring something new and fresh to the category. With Mustang by Design: Gale Halderman and the Creation of Ford’s Iconic Pony Car, automotive journalists James Dinsmore and James Halderman, Gale’s cousin, have brought new and fresh scholarship to the subject. It’s the first book that does a deep dive into the design and development of America’s first and favorite Pony Car.

Not only does the book cover the design evolution of the first-generation Ford Mustang, but it tells of Gale’s rise through the ranks at Ford, starting with his graduation from the Dayton Art Institute in 1954. Throughout the 1950s and into the early 1960s, Gale worked on a number of projects that included the facelift of the full-size 1957 Ford – one of the few instances in that era where Ford outsold Chevrolet – and contributed to the design of the compact Ford Falcon and the 1961 Thunderbird, often referred to as the Bullet Bird.

Success with these projects put Gale in the position of being in the right place, at the right time, working for the right boss, Joe Oros, to be tasked with an important role in the Mustang’s early development track. In August 1962, when he sketched the design that would evolve into the Ford Mustang that would debut in April, 1964. Authors Dinsmore and Halderman touch all the important points and people in the program, like Henry Ford II who would initially approve the funding of the program in the wake of the Edsel debacle, Lee Iacocca – who is best known as the Father of the Mustang – and engineering guru, product planner Hal Sperlich. All together the trio presided over one of the most successful automotive launches of all time. One of my favorite sections of the book are pages 44-45 where the differences between the early-production (April-August 1964) 1965 Mustangs (often referred to a 1964 ½ models and those that followed for the remainder of the 1965 model year. Chapter 5 that follows documents Gale’s involvement of the fastback variant introduced in the fall of 1964 as the third Mustang model for 1965. If the book has a shortfall, it’s that not more of the photos of the preproduction clay models and prototypes showing the design evolution of the first-generation Mustang that were not in the book. But this is more than compensated by the excellent first-person narratives that come from Jimmy and James’ interviews with Gale which make Mustang by Design such a special book.

The rest of the book charts the evolution of both the Mustang as well as Gale’s career at Ford and later, Lincoln-Mercury. At Lincoln-Mercury, Gale managed the design of such notable vehicles as the 1970 Mark IV where one of his signature design contributions was the “Opera Windows” that was incorporated into the car’s C-pillar.

Many readers will see this as a photo documentation of Gale’s career at Ford from 1954 to his retirement in 1994. It’s that and more. (In the spirit of full disclosure, I contributed several photos to the book.) The book serves as a timeline into the inside, behind the curtains look at the Ford executive suites in Dearborn over more than four decades. As such, it’s a very valuable addition to the bookshelf of any Mustang fanatic as well anyone who is looking for more than a cursory look at this fascinating period in the history of the Ford Motor Company.