2018 Mustang Week: This is Possibly The Best One Yet! 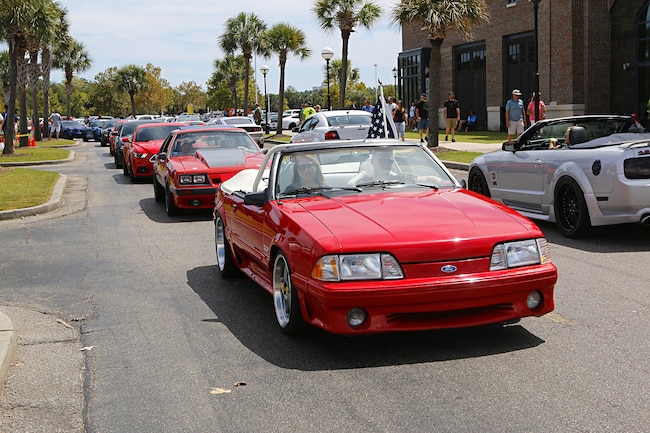 With no disrespect to other events, we’ll say that Mustang Week sets the bar. It’s the original Mustang destination event. More than a weekend drag race, more than a one day car show, and more than a weekend open-track event. It’s all those events and lasts a whole week. Rodney Melton’s brainchild seems to get bigger and more entertaining each year, and there are no signs of that changing. Melton has a lot of help these days to put on the best Mustang Week possible. His team continues to evolve and embrace the different needs of the Mustang market.

Mustang Week’s 2018 version started on September 3 with, once again, the Meet & Greet at Broadway at the Beach. Mustang Week unofficially kicks off the Sunday prior, but officially, Tuesday, September 3, was the first day to take over Myrtle Beach, South Carolina. Broadway at the Beach is a tourist destination with various souvenir shops, restaurants, and clubs. Therefore the parking lot is rather massive, but it’s no match for Mustang Week, when it gets totally taken over by Mustangs. The lot is so packed with Mustangs that regular cars are relegated to one of the smaller parking lots so that “normal” tourists can enjoy the destination. The Meet & Greet presents an opportunity to see all your Mustang friends, check out the new builds, and stack up on event swag. September 3 was also the day to get behind the wheel and turn laps as part of the BFGoodrich Mustang Week Autocross Driving School. Attendees went through class sessions on car control, trail braking techniques, and new course analysis before getting on course. Speaking of which, a course was set up in the infield of Myrtle Beach Speedway for those wanting to test their handling prowess.

Tuesday’s Broadway at the Beach Meet & Greet presents Mustang Week attendees the first opportunity to pick up the newest event T-shirt and assorted swag. The Meet & Greet doesn’t officially start until 1 p.m., but even if you arrived by noon you’d have been late. We saw Mustangs gathering early in the morning to grab good parking spots and to get in line for swag.
As Mustang Week progressed, Thursday’s venue was North Myrtle Beach Drag Strip. Mustang Week attendees were able to burn some tires and adrenaline without worrying about the local authorities applying the chrome bracelets. North Myrtle Beach Drag Strip welcomed participants with open arms as everyone tried to improve their Mustang’s elapsed times.

Bringing it home, Friday’s Mustang Week Car Show, presented by CJ Pony Parts, took over Myrtle Beach Convention Center. The convention center’s outside and inside played host to more than 900 Mustangs, along with all the popular Mustang vendors set up to showcase the latest performance goodies.

Clint Derango works at Anderson Ford Motorsport and uses his 2011 Mustang GT as Ford intended. His GT boasts a Boss intake, long-tube headers, a built 8.8 rear, and of course an Anderson Ford Motorsport (AFM) Power Pipe. The GT makes 428 hp at the wheels, and Derango says the AFM Power Pipe with a canned SCT tune is good for 28 hp. Derango is probably more famous for winning a burnout contest in Nick Meyer’s Coyote-swapped 1993 Cobra at the Big Beaver during one of Mustang Week’s After Hours events.
We look forward to Mustang Week every year. We’re not the only Mustang enthusiasts who live for this event, nor are we the only ones who go into Mustang Week prep mode weeks before so our car will be in tiptop shape. We thoroughly clean our Mustang’s wheels, wax the exterior, clean up the engine’s valve covers, tuck as many wires as we can, treat the headlights to a resto, paint a few trim items, and so on, just to make sure our car is ready for Mustang Week.