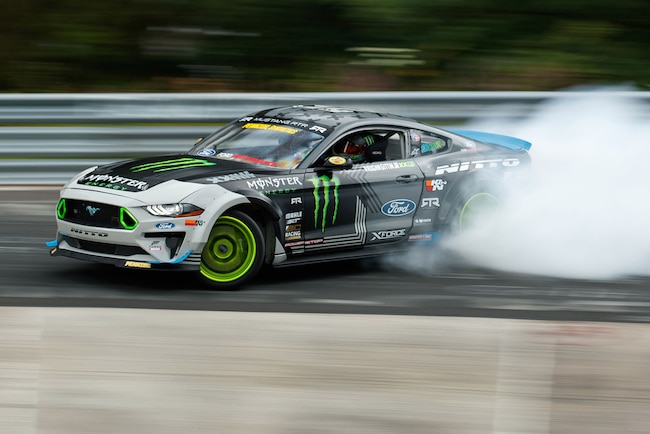 We shared with you the early edit of Vaughn Gittin Jr’s bucket list drift of the Nürburgring last month, which was presented by Ford Performance and titled Drift King of the Ring. That edit has been seen by over 2.5 million fans to date and if you’re NOT one of them you can catch it HERE. Well, now the full 12.9 miles of Nürburgring drift action, with speeds hitting 150 mph, has dropped in an extended cut of the video, presented by Monster Energy, and we’ve got plenty of behind the scenes info and images to share below too!

The Nürburgring Nordschleife course is a winding 73 turn track famous for its use to gauge the top performance cars in the world. The literal “what is its lap time at the ’Ring” is something automotive enthusiasts ask constantly of their favorite performance rides. From the Ford Shelby GT350, to the Camaro and Corvette, to exotics, they’ve all hit the ’Ring looking to best its previous generation and its closest competitor. But to actually drift all 12.9 miles and 73 turns? That’s simply a dream come true for Ultimate Fun Haver Vaughn Gittin Jr.

“The Nordschleife is one of, if not, the most iconic track in the world and I have been in love with the danger and folklore of the famous Green Hell at the Nürburgring since I can remember. I finally went there in person in 2013 and it was then that I made a promise to myself that one day I would return to drift it in its entirety. Drifting the Nürburgring represents the ultimate challenge to me: it is something that many questioned whether it would be possible and whether the car and driver could do it and come out in one piece. Something inside of me had to take this on to find out.”

While drifting is strictly forbidden on the Nordschleife, this is the first time anyone has done a full-on drift attack on the complete Nordschleife at the Nürburgring and who better to tackle it than Gittin in our opinion! Gittin’s 2018 Mustang RTR didn’t require any special modifications to be able to drift the entire course, though Team RTR did have to replace Vaughn’s Nitto NT555 G2 tires three times to be able to drift the entire 12.9 miles. That’s roughly 90,000 miles of tire tread used! “When we stopped for the first tire change I was elated. I had to catch my breath, which is something I have never experienced behind the wheel since I was a rookie in Formula Drift,” Vaughn added.

Along with the two current edits of the video we’ve shared here there is a “behind the scenes edit” and a “Forza Motorsports ‘gaming’ edit” both coming out soon with even more exciting footage that we hope to share with our visitors, so keep coming back to Mustang-360.com or sign up for our newsletter so you don’t miss these other videos coming soon! Vaughn closed with “When people watch this video, I hope it offers an intense and fun experience. I hope they see a guy and his Ford Mustang sidekick pushing outside of his comfort zone and the limits of what should be possible with a car. I hope they are inspired to push themselves beyond their comfort zones and enjoy the ride!”