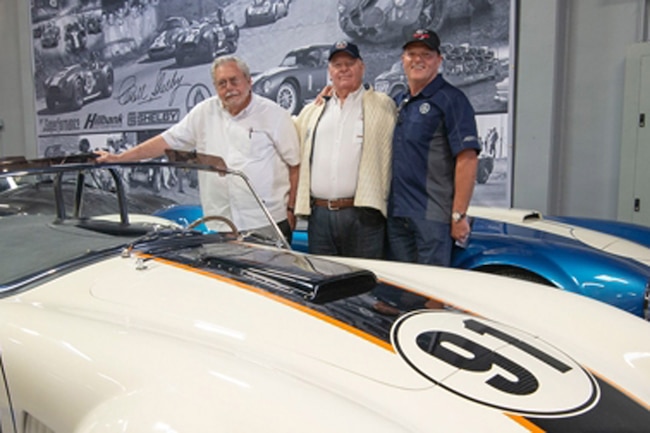 Customers of Shelby Legendary Cars, the official licensed builder of authentic 1960s Shelby continuation Cobras, Daytona Coupes, and GT40s, can now send their vehicle for completion to the Original Venice Crew. Ted Sutton, one of the OVC founders, helped build the prototype 427 Shelby Cobra for Carroll Shelby in 1964; OVC’s first project will be the completion of an Essex Wire Cobra tribute big block roadster.

“OVC is giving enthusiasts the opportunity to add incredible authenticity to their Shelby Cobra,” said Lance Stander, CEO of Shelby Legendary Cars and Hillbank Motor Company. “Ted Sutton was among the people who built the first Shelby cars during the 1960s. Since Hillbank already offers their OVC-built 1965 Ford Shelby G.T. 350 competition cars through our Irvine and Tempe showrooms, it was natural for Ted and the team at OVC to finish Cobras for customers who purchased through us.”

If a customer chooses, Shelby Legendary Cars dealers will supply an assembled body and chassis to OVC. The customer will then specify the exact drivetrain and accessories. The new owner can choose to leave the final build at OVC in the capable hands of the same team who prototyped the original Cobras over 50 years ago.

The Original Venice Crew built the first series of Shelby American racecars based on ‘65 Mustang fastbacks. They reunited to build a limited series of the cars in Southern California that are licensed by both Carroll Shelby Licensing and the Ford Motor Company. These authorized versions of the 1965 Shelby G.T. 350Rs feature a race-focused independent rear suspension originally designed at Ford in 1964. Only 36 cars will be built, each incorporating several experimental enhancements designed by Shelby American designer Peter Brock. Hillbank is an authorized dealer for the OVC built cars.

Jim Marietta, CEO of the Original Venice Crew, worked for Shelby American in 1965 and is equally excited by the association with Shelby Legendary Cars. “Rarely has ‘now’ so convincingly converged with ‘then’,” said Marietta. “For someone investing in a continuation big block, FIA or small block street Cobra, the smallest of details can add up to a huge difference in the finished vehicle. Since we were part of the build of Cobras in the 1960s, we understand the nuances of these very special cars.”

Their first project will be a tribute to a competition roadster (chassis CSX3009) that has been called the winningest 427 Cobra. It was first campaigned in 1965 under the sponsorship of Essex Wire, Ford Motor Company’s largest supplier at the time. Essex Wire campaigned the car only one year before moving to a Ford GT40, but the 427 continued to race at the professional level and at club events until the mid-1980s. The white Shelby continued to rack up wins for decades. The OVC-built car will be identical to that iconic Cobra down to its orange pinstripes.

“An OVC finished Shelby Cobra is like owning a time machine, but one distinctly different from the version dreamed up by H.G. Wells,” said Sutton. “Instead of building the car in the present moment, each and every assembly will mentally start around 1964. It’s as authentic as you can get.”

Although what is available through the Irvine showroom could very easily be put, at least figuratively, on a display shelf, everything Shelby Legendary Cars supplies begs to be driven. Whether it’s a weekend at the track or a week spent navigating the California coast, there are few automotive experiences comparable to turning the key and having a powerful Ford engine ignite immediately in a Cobra roadster or Daytona Coupe.

“Shelby Legendary Cars offers GT40s, as well as genuine Shelby Cobras and Daytona Coupes with CSX serial numbers that are entered into the Official Shelby Registry,” said Stander. “By tapping the talents of the Original Venice Crew, whose membership includes Shelby alumni Sutton and Marietta, a customer not only benefits from the mechanical expertise of today, but the historical perspective earned from a World Manufacturers Championship and Le Mans victory. These guys are true pioneers. It’s a heady mix, and something that cannot be found anywhere else.”

Lynn Park’s latest Cobra—real patina or brilliant illusion? Lynn’s new Cobra is known as “Son of Dirt Bag” and it never fails to get attention everywhere it goes.