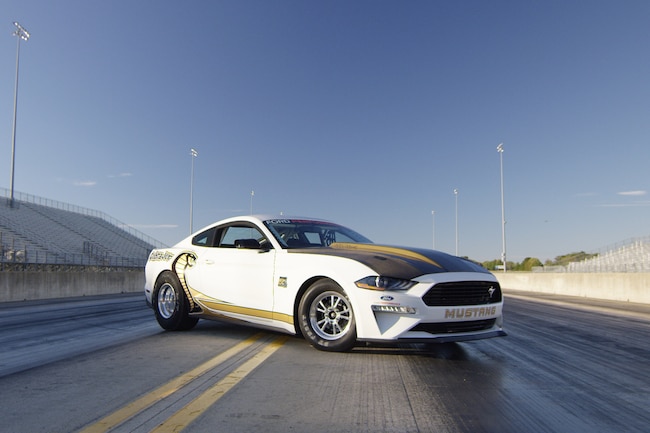 It wasn’t long ago that we showcased the 50th Anniversary Mustang Cobra Jet reveal. However, we just learned that Ford Performance has chosen Mickey Thompson Tires & Wheels to provide tires for the turnkey Cobra Jet race car.

Only 68 limited-edition 50th Anniversary Mustang Cobra Jet models will be produced, paying homage to the car’s 1968 debut at the NHRA Winternationals in Pomona, California, where it began its long history of winning and setting records.

The Ford Performance engineering team behind the 50th Anniversary race car sought to develop the quickest and most powerful Mustang Cobra Jet ever to leave the factory. That’s why the automaker turned to the experts at Mickey Thompson Tires & Wheels to procure high-quality tires.

Mickey Thompson’s tires are part of a high-performance package developed by Ford to help the Mustang Cobra Jet top 150 mph, while blazing the quarter-mile in the mid-8-second range.

“Mustang Cobra Jet owners make a habit of placing their faith in the best products and materials on the market,” said Tom Kundrik, Motorsports Manager of Mickey Thompson Tires & Wheels. “Ford put us to the test and Mickey Thompson tires were proven to be the fastest and most consistent among the tires they tested on the strip. Many championship racers have come to rely on our ET Drag Pro Drag Radials for better elapsed times and reliable performance on the dragstrip.”

The 50th Anniversary Mustang Cobra Jet is the first original equipment vehicle to leave the factory with Mickey Thompson tires. It is powered by a special 5.2L version of Ford’s famed 5.0L V-8, strengthened and outfitted with a 3.0L Whipple supercharger. The engine sends power to the ground through a 9-inch solid rear axle, two-way coilover shocks with adjustable ride height, and a low-drag disc brake system from Strange Engineering, as well as a four-link rear suspension with antiroll and Panhard bars.

“There are 68 future owners of the 50th Anniversary Mustang Cobra Jet, and Mickey Thompson is proud to deliver the high-quality and performance they demand,” Wycoff added.

The 50th Anniversary Cobra Jet will be featured in the Ford booth (No. 22200) during SEMA 2018 on Tuesday, October 30, before moving to the “Ford Out Front” display Wednesday through Friday for the remainder of the show.