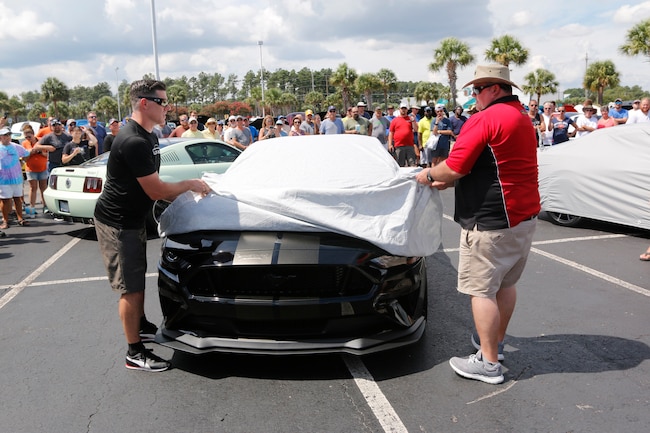 Over the last decade one of the most anticipated event of the Mustang Week Meet & Greet has been the unveiling of the official Mustang Week Edition cars build specifically for the show that anyone can buy through sponsor Palmetto Ford in Charleston, South Carolina. Every year Mustang Week’s Mike Clay and Palmetto Ford’s Tony Barron work together to design the cars for Mustang Week.

Once the design is approved and the vehicles pulled from inventory (or special ordered) the build commences internally at Palmetto Ford with key suppliers and outside labor/assistance as required. For example, this year’s Mustang Week edition cars both had vinyl wrap/graphics added by Bullitt Auto Detail & Vinyl Graphics, one of Mustang Week’s sponsors. Also a first for the Mustang Week edition this year—a specific request by a Mustang Week attendee and close friend of Tony’s. Essentially the one Mustang Week edition (two were produced again this year) was pre-sold this time out.

For 2018 Mike chose a 2018 Mustang GT fastback in Shadow Black with Performance Pack 2 option. This meant the customization would be kept to a minimum with Ford’s more than capable PP2 package offering up many OE bits that would normally be swapped out in such a build. The PP2 cars come with Ford’s MagneRide shocks/struts, active valve exhaust, big Brembo brakes, cloth Recaro seats, and more; making them very capable cars out of the box. To this Mike added Mustang Week graphics from Bullitt Auto Detail & Vinyl Wraps, Mustang Week Edition emblems from AutoBadges.com, and a killer Satin Bronze Velgen Classic5/Nitto Tire staggered 20-inch combo at all four corners from LMR.com.

Tony’s build started with a 2018 Mustang GT convertible in Royal Crimson Metallic. However, strange as it may sound, the convertible was already claimed and sold! Yep, a Mustang Week 2017 attendee told Tony that she wanted a red Mustang Week convertible. Months went by and Tony thought it was just an excited Mustang enthusiast, but then the phone rang at Palmetto Ford and low and behold it was her, reminding Tony that she was going to be at Mustang Week 2018 and wanted her red convertible! She picked the Royal Crimson Metallic top coat (as would we!) and requested a few specific Ford options/features, and then Tony got to work on the rest of the build.

Starting with the wheel and tire package Tony fitted the drop top with 20-inchVossen CVTs in gloss black tinted faces wrapped Pirelli P-Zero tires. Of course with a set of killer rolling stock like this you can’t leave the Mustang at stock ride height or risk ridicule! On went a set of lowering springs for the perfect stance. For exhaust MagnaFlow got the nod for an axle-back system, giving the convertible just the right amount of attitude the owner was looking for. Of course attitude isn’t just about exhaust note or ride height. No, this car’s attitude got a major bump thanks to several visual additions like the convertible light bar, embroidered head rests, a SpeedKore carbon fiber splitter (the first retail unit sold to the public!) and body-color brake calipers and rotor hats by Rick Pelow of Palmetto Ford’s body shop. Out back Autobadges.com created a one-of-a-kind decklid panel with “Momster” graphics while Ken at Bullitt Auto Detail did the vinyl wrap/graphics in 3M Gloss Galaxy Black.