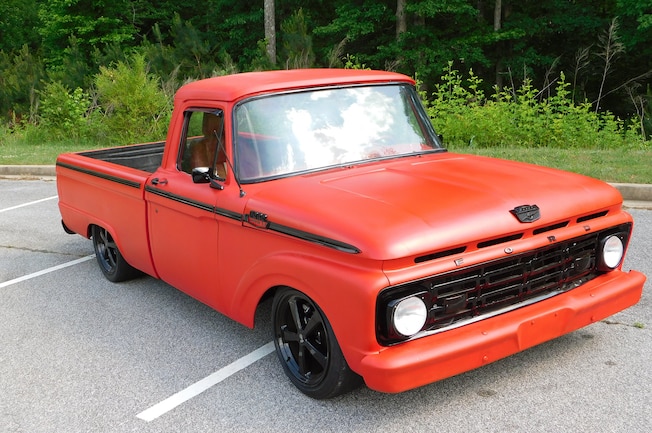 The introduction of the Coyote engine in the 2011 Mustang GT not only impacted the Mustang performance industry, it has also had a huge impact on the truck market. Because of the horsepower capabilities and the aftermarket support for everything-Coyote related, the engine has become the engine swap of choice for many performance truck enthusiasts.

The 1964 Ford F100 truck’s rebirth was started by Armondo Morales, but it was then purchased as a project and finished by Chuck Williams at West Atlanta Hot Rods. The engine is a 2012 Mustang GT Coyote engine with a 6R80 automatic transmission supplied by The Parts Farm in Lyons, Georgia. Feeding the hungry Coyote is an Aeromotive return-style fuel system, while a Power by the Hour tune makes sure the truck goes down the road at a rapid clip.

To keep the Coyote engine cool, it uses the same 2012 Mustang GT radiator and fans from the donor car, sourced from The Parts Farm. A Vintage Air A/C system keeps the interior as cool as the truck itself.

The factory F100’s front suspension was removed and replaced from a 2008 Crown Vic. During the suspension’s construction, the frame was fully boxed before adding a 2004 Mustang GT 8.8 rearend and is augmented by a Heidts four-link setup with Competition Engineering coilover shocks. Shoes and socks are made up of 2004 Mach 1 wheels, which have been painted black.

For the F100’s exterior, instead of going the patina route, West Atlanta Hot Rods applied a few coats of Satin Apple with gloss black moldings and trim. This F100 build is further proof these trucks are hot right now, but with a Coyote under the hood like this one, popularity will only continue to grow. You better start your F100 Coyote project now.

On the inside you can see more components and pieces from the 2012 Mustang GT donor, including the seats. The exterior color is almost a perfect match for the factory buckets.