Testing a TorqStorm supercharger setup in a pushrod 5.0L. 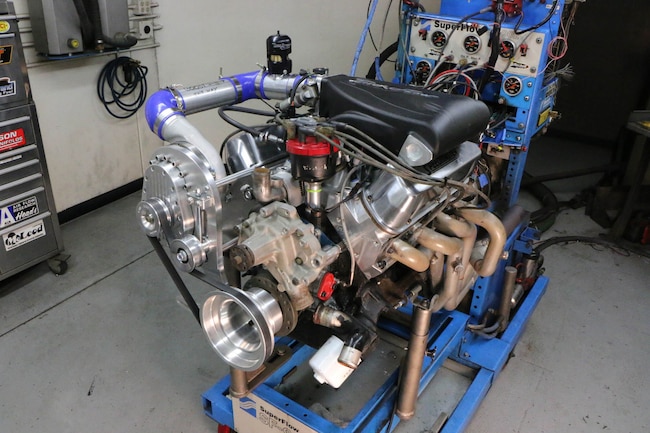 The current Coyote has a lot going for it, including one amazing 5.0L power plant. Equipped with four-valve heads, variable cam timing and a host of sophisticated electronics, it has proven more than capable of holding its own against the larger competitors from GM and Dodge. How good is the Coyote, you ask? Think about this. Despite sharing identical displacement, the modern Coyote offers an extra 210 horsepower compared to the original fuel injected 5.0L Ford (circa 1986-1995). Given that the original 5.0L only managed 225 horsepower, Ford engineers have managed to nearly double the power output of Ford’s first fuelie. The extra power bodes well for the current Coyote owners, but where does it leave original Fox fanatics? After all, that little 225hp 5.0L created not just a following, but an entire industry. This begs the question, is there still hope for the little 302 in age of the killer Coyote?

Let’s start by saying that given an unlimited budget, almost any motor can be made to produce serous power. Looking at the current levels, the 225hp 5.0L has a long way to go to even catch the power output of the 435-485hp Coyotes, Camaros and Challengers, but rest assured, it can get there. In fact, using bolt-ons and boost, we managed to easily surpass the output of these modern motors, clearly demonstrating why the original was so popular in the first place.

Of course, we are talking about how well the little Ford responded to modifications, and more importantly, how many mods eventually became available for them. We tested in the neighborhood of 30 different cylinder heads in our multi-part, Ultimate Guide to Cylinder heads for the 5.0L. How many aftermarket heads are currently available for the Coyote? It is this parts availability that allowed, and continues to allow, 5.0L owners to pick and choose their desired level of performance. The availability also breeds competition, which lowers pricing to the consumers, so mods for modern powerplants are generally more expensive than the original 5.0.

To illustrate just one of the countless numbers of directions for improved performance available to 5.0L owners, we decided to take a 5.0L Ford and subject it to what we call the world’s best bolt on. Of course we are talking about boost, but before we get to that, know that our test motor was already elevated from stock. The 5.0L actually came from an Explorer, but the GT40 heads (ours was an early version that had not yet received the P heads), Cobra-style intake and wimpy stock cam had long since been removed. These were replaced with a set of CNC-ported, Twisted Wedge 11R heads, a matching Street Burner upper and lower intake and a Comp XE274HR cam. This type of top-end upgrade has been common since the advent of the Twisted Wedge head, and the recently released 11R series are evidence that the original 5.0L market is still strong enough to warrant new development. With flow numbers capable of supporting near 550 horsepower on the right application, the 11R heads were the real deal, but our Explorer short-block would get nowhere near those numbers; at least not until we added boost. Run on the dyno with Hooker headers, an Accufab throttle-body, and Holley ECU controlling a set of 80-lb/hr Accel injectors, the normally aspirated 302 produced 407 horsepower at 6,200 rpm and 397 lb-ft of torque at 4,500 rpm.

While the power output of the modified 302 was ample, we here at MM&FF don’t do stories about just ample power production. To step things up, we decided what the modified motor really needed was some boost. Looking to try something new, we took TorqStorm up on their offer to run one of their centrifugal superchargers. Having tested it in carbureted form for our sister book over at Car Craft, we wanted to see how well it worked on our injected combination. The kit from TorqStorm worked well, was easy to install and best of all, the blower belt never slipped on us during testing. There is nothing more frustrating than having belt slippage take up valuable dyno time. The blower bracket featured a fixed (not spring-loaded) tensioner that was first adjusted then secured in place. This produced a perfectly repeatable boost curve, which in turn allowed us to quickly dial in the air/fuel and timing curves using the Holley HP management system.

The TorqStorm supercharger was not sized to put a scare into the Street Outlaw boys, but rather for realistic power numbers. Capable of supporting 700 horsepower, it was a perfect fit for our modified 5.0L. Remember, any production 5.0L is limited by the block strength, and it’s easy to exceed that number with almost any type of boost. The combination of an 8-inch blower and 3.25-inch crank pulleys supplied with the kit produced a peak boost pressure of 10 psi at 6,500 rpm. The kit also included a blow-off valve to help eliminate the pressure spike that occurs under high rpm/boost, lift-throttle conditions. After hooking up the TorqStorm setup, we were rewarded with 638 horsepower at 6,400 rpm and 545 lb-ft of torque at 5,600 rpm. The boost rose in linear fashion from 3.1 psi at 3,200 rpm to 10 psi at 6,400 rpm, and the horsepower curve followed suit. Though this 5.0L was definitely better with boost, the 638 horsepower output was well within block-splitting territory. We’d like to see this blower applied to the same mods on a larger (and stronger) 351W, but that is another test for another day.

How do you improve a 5.0L Ford? Here is a hint-things go better with boost!
The test mule was a simple 5.0L Explorer motor stripped of its GT40 heads, cam and induction system. To properly secure the boost, we added Fel-Pro 1011-2 head gaskets and ARP head studs.
The stock stick was replaced by a Comp XE274HR cam that offered a .555/.565 lift split, a 224/232-degree duration split and 112-degree lsa. This was one of our all-time favorite 5.0L cam profiles for the street.
The stock GT40 heads were replaced by a set of CNC-ported, TFS Twisted-Wedge, 11R heads. The 170cc heads flowed amazingly well and were sized perfectly for the little 302.
Topping the 11R heads was a TFS Street Burner lower EFI intake.
To ensure adequate fuel delivery, we installed a set of 80-lb/hr Accel injectors.
After installation of the injectors, we popped on the Street Burner upper intake manifold. The TFS induction system was designed to optimize power production up to 6,500 rpm.
Naturally the intake and ported heads needed plenty of airflow, so we installed this 75mm throttle-body from Accufab.
MSD supplied the necessary billet distributor, which we combined with a 6AL ignition amplifier to provide the necessary spark energy under boost.
With plenty of air being forced through the motor, we made sure the exhaust system was up to snuff by adding a set of 1 ¾-inch, Hooker Super Comp, Fox-chassis headers.
Run on the dyno in normally aspirated trim, the mildly modified 302 produced 407 horsepower at 6,200 rpm and 397 lb-ft of torque at 4,500 rpm.
After establishing a baseline in normally aspirated trim, we installed the 8-inch crank pulley supplied by TorqStorm.
Using the supplied hardware, we bolted the blower mounting bracket to the passenger-side cylinder head.
Seven bolts were then used to secure the TorqStorm centrifugal supercharger to the mounting bracket.
The supercharger was equipped by TorqStorm with a 3.25-inch blower pulley. When combined with the supplied crank pulley, the result was a peak boost pressure of 10 psi.
The 8-rib belt was first adjusted, then secured in place using the two-bolt tensioner. This system provided a repeatable boost curve run after run.
Because our kit was originally designed for a carbureted application, we whipped up our own discharge tube (TorqStorm offers kits specifically for EFI applications like ours). The custom discharge tube included the supplied blow-off valve.
Boost is a wonderful thing, and really woke up our little 5.0L. After the top-end modifications, the 5.0L Explorer motor produced 407 horsepower and 397 lb-ft of torque. Adding the TorqStorm centrifugal supercharger to the mix upped the ante to 638 horsepower and 545 lb-ft of torque. Stuffed in a lightweight, Fox-chassis Mustang, this much power would be one serious piece of street hardware.