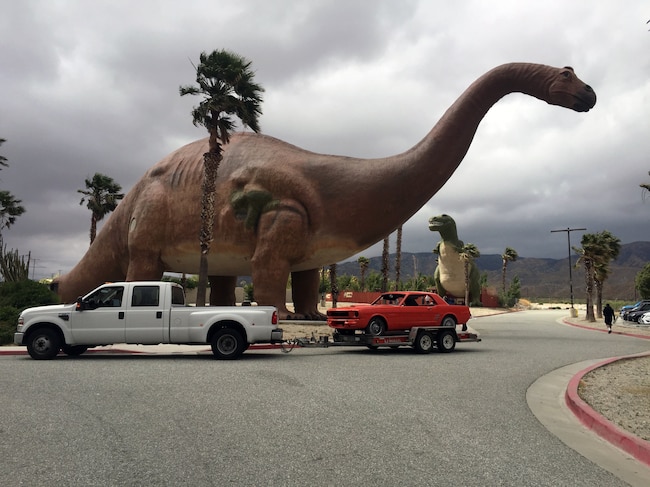 About ten years ago, one of the most popular shows on cable TV was Overhaulin’ with Chip Foose. The show centered around a much-loved car being “stolen” from its owner by a friend or family member, then completely rebuilt from the ground up by Chip and his band of merry men (and ladies!) in a week—the manufactured “deadline” set by the production company for the sake of drama—then presented to the owner at a surprise unveiling with everyone present.

The show made Chip Foose a household name and provided a lot of exposure for the participating companies that donated parts and labor, but it had the unfortunate downside of making people believe that you can actually build a car from sow’s ear to silk purse in a mere week. If you’ve ever built you own car, Mustang or not, you know that is totally unrealistic. In fact, the behind the scenes reality was that those vehicles were never “done” when the show wrapped, and required a lot more work to “finish.” I know; I was there for a few of them.

Mustang Monthly is doing our own version of Overhaulin’ in July, right around the time this issue hits your mailbox, but our car will be done and drivable at the end of the week. We’re calling it Week2Wicked, and it’s the fifth such build that our company has participated in recently. The first few were for our company’s Chevy and truck brands, but since we’re all about Mustangs we’re building a 1966 hardtop. The buildup is primarily video based and you can watch the whole saga on our website, Mustang-360.com, but we’re also going to treat the car like a standard magazine project car build, with most of the big steps covered in these pages.

The car we’re starting with is an original-owner, California car with a six cylinder and leaky C4 automatic. Since it appears to have lived its whole life in Southern California, there’s not a spec of rust on it but it has plenty of shopping cart dings and dents and a totally hacked driver’s door jamb and latch, so our first step was to send it to Superstition Restoration in Mesa, Arizona for the bodywork and paint. Mike Rossi and Justin Smith at Superstition smoothed everything out, replaced the door with new steel from Dynacorn, and fit the Mustangs to Fear fiberglass nose and hood, then laid down a blinding 2015 Mustang Competition Orange paint job. The photo below is of our trip home to deliver the car to our tech center in Santa Ana, CA for the upcoming hell week of Week2Wicked, stopping to let the dinosaurs in Cabazon check the Mustang out.

We’re going to do a portion of the build, the time-consuming stuff that will slow us down during the week, ahead of time. Things like wiring, suspension fitting (but not final installation), and some interior bits and pieces, but the bulk of the build will happen during the week of July 17, with all hands on deck. Mark Houlahan and I will be joined by Muscle Mustangs & Fast Fords staff Henry De Los Santos and Mike Johnson, along with our shop manager Jason Scudellari and a few of the sponsors to slam this baby together in a week.

It won’t be a limp-wristed secretary’s Mustang either. We’re using a Ford Performance M-6007-S23633FT crate engine that makes 507hp in an 8.2-inch deck Windsor small-block with FiTech EFI and a Performance Automatic 4R70W transmission, and the suspension will be all CPP parts. When it’s all done and we’ve had some fun with it (we’re thinking a cruise up Highway 1 along the Pacific ocean and maybe a track day at Laguna Seca Raceway would be fun), we’ll drive this beauty to the 2017 SEMA show in Las Vegas where it will be in our company’s booth right on the main floor, not far from the big Ford display area. Depending on the timing and budget, you might also get the chance to see the car at some of the Ford shows around the country in coming months. So stay tuned to Mustang-360.com for the complete buildup on video, and this magazine starting roughly in the November 2017 issue. It’s going to be a fun build, and an even more fun car to drive. Wish us luck!