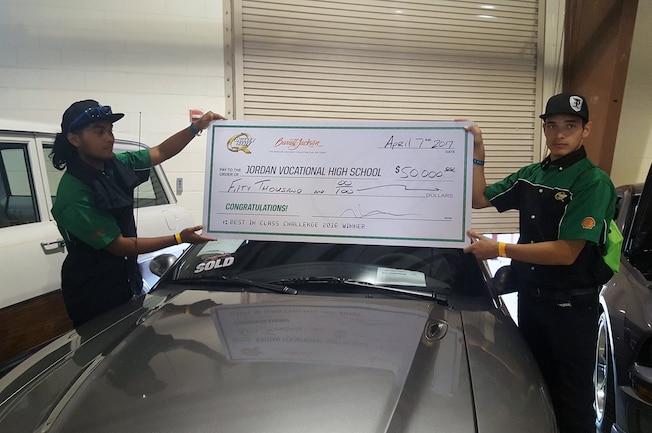 Last month we shared with you the story of Jordan Vocational’s involvement in the Quaker State’s Best in Class Challenge and its winning Mustang build. If you missed it you can click through to the story HERE to read all about the Mustang build and the Quaker State challenge program. Since the Barrett-Jackson Palm Beach auction is only three hours from our Florida office we decided to hit the auction and see the Mustang cross the block ourselves and talk with Robert Harris, the automotive instructor involved, and some of the Jordan Vocational High School students. We were able to get a few minutes with Robert, his students, and Laura Jaime, Quaker State North American Marketing Manager right after the auction. See the on-site video we shot elsewhere with this story (and apologies in advance on the noise level, the auction grounds are a noisy place!).

The Mustang was scheduled to cross the block at 3:30 pm on Friday, April 7th. The Mustang, along with the students and key people from Quaker State were queued up outside the auction stage at roughly 3:00 pm.

No one could imagine that the Mustang would eventually sell for $50,000 when the gavel finally cracked, but that’s not the most amazing part of this storied weekend. No, the winning bidders, entrepreneur and collector car magnate John Staluppi and his wife Jeanette, who purchased it for the $50,000 (Barrett-Jackson waives bidder fees on charity auctions) actually announced that they would re-auction the Mustang at the Barrett-Jackson Mohegan Sun Northeast Auction! “In an ultimate show of generosity, John and Jeanette announced they would re-auction the Mustang at our Northeast Auction to spur additional donations for the Jordan students,” said Craig Jackson, chairman and CEO of Barrett-Jackson. “We’re grateful for their kindness and that of our other bidders who purchased charity vehicles.”

That means that the Jordan Vocational High School automotive program will not only have the $50,000 from the Palm Beach auction to use for shop improvements, tools, and other program needs, but they’ll also hopefully see a lot more come June 21-24, 2017. Currently the Northeast 2017 auction docket has not been finalized, so we cannot provide a direct link, but if interested in bidding on the Jordan Vocational High School’s Mustang please see www.barrett-jackson.com and select the Northeast 2017 auction.

Excitement was at a fever pitch as the Mustang inched towards the stage. Here the Mustang is up next and several of the students were texting friends and family to watch live on Velocity Channel.
When the gavel dropped the crowd applauded the final price and everyone on stage was certainly in a state of shock!