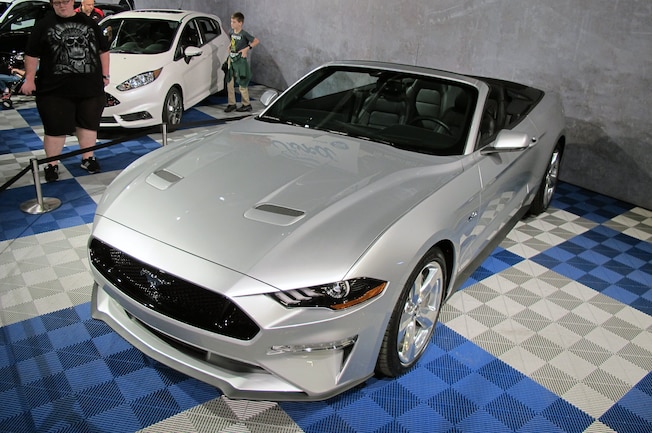 We were already planning the three hour trip down to Palm Beach, Florida to cover other aspects of the 2017 Barrett-Jackson auction when we received a note from one of its public relations staff that Ford would debut the convertible body style for the freshened 2018 redesign coming at the end of this calendar year. Not only would it be one of the first pre-production convertibles displayed in the United States, but Ford Performance Marketing Manager (and great friend to the Mustang faithful) Jim Owens would be on site to go over the 2018 model changes—what’s been confirmed and can be discussed anyway. We moved a few things around in our Barrett-Jackson schedule and happily met up with Jim on Friday afternoon.

If you’ve never been to a Barrett-Jackson event it is a living, breathing entity all in its own world. Even the smaller satellite events like Palm Beach, while nothing like the Scottsdale opener in January, are still ginormous events packed with people. That said it is always noisy and crowded, so being able to interview Jim on Friday was a much better situation than having to speak with him on Saturday when the show floor is truly a madhouse. Still, with the nearby Dodge booth trying to get some camera attention (who set’s a car alarm on a show floor?) and our lapel mic deciding it was going to fail minutes before we needed it, we’re grateful to be able to spend a good 15 minutes going over what Ford can say/release about the 2018 to date. So grab a cup of coffee or your favorite drink and click play on the video and take a closer look at the 2018’s styling in our photo gallery below.

One of the most visible changes to the 2018 at the rear will be the quad-tip exhaust.
Hood vents are redesigned for 2018. They’re wider with more style/definition lines in the hood stamping. Also notice the vents are inboard now on the main center portion of the hood.
It’s yet to be determined all of the trim packages, but it would appear GT Premiums will get this Piano Black-like painted grille assembly versus the pebble grain molded black plastic. We like!
A close up detail of the infamous Mustang running horse. Happy to still see it leading the way into 2018.
The most commonly discussed visual cue to the 2018 is the new front fascia. The angularity of it is a love/hate with people, but put us in the “love” column.
Also up front are new lighting aspects. The headlights, turn signals, and fog lights are all LED-based now. We’re not sure if the opening directly under the headlight assembly is functional or not, as we weren’t allowed to open the hood.
This GT Premium convertible featured the all new configurable 12-inch LCD instrument cluster option (GT and EcoBoost Premiums only), Shaker audio system and all-new 10-speed automatic.