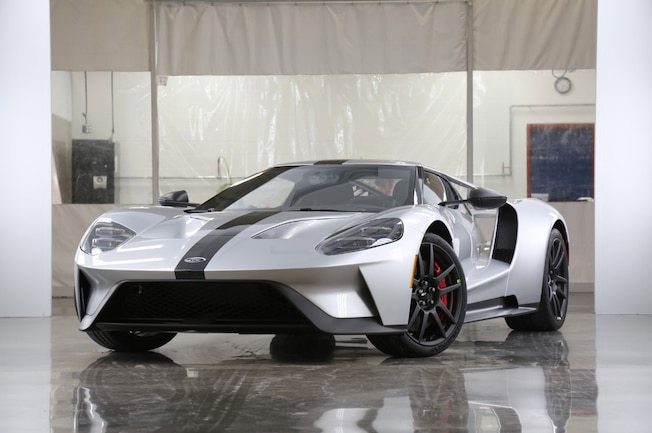 Like Ford fans aren’t going ballistic enough over the Ford GT’s production and launch details (we’re seeing customer cars getting delivered now) we now have more interesting Ford GT news coming from the grounds of the famed Daytona International Speedway just days before the 2017 Daytona 500. It was here, just a month ago, that the Ford GT made its way to the winner’s circle during the Rolex 24 race and Ford felt it was the perfect location to introduce to the world the Ford GT Competition Series.

The Ford GT Competition Series was engineered to build on the supercar’s innovative lightweight and aerodynamic design, which includes copious amounts of carbon fiber, active aero management, and more. Ford engineers removed weight that was higher in the vehicle, such as the A-pillar area, rear engine hatch, and more, which shifts the center of gravity closer to the track for even better road-holding, and to maximize its 647 horsepower engine. “The Ford GT has racing in its blood,” said Raj Nair, Ford executive vice president, global product development, and chief technical officer. “The Competition Series was developed with the most hardcore track enthusiasts in mind, providing a tailored set of lightweight features and unique livery to match.”

For example, the innovative lightweight, race-inspired Perspex acrylic engine hatch cover with manual latch and carbon fiber prop rod reduces weight near the roof and shifts the balance of weight lower in the car. Similarly, the Gorilla Glass bulkhead behind the driver is about half as thick (and lighter) as on other Ford GTs.

While all performance features from the standard production Ford GT remain in the Competition series, including the FIA-certified steel roll cage and active aerodynamic system, items not entirely essential to performance have been removed and are not available as options to add back in. This includes the air conditioning system, radio and speakers, stowage bins, and cup holders. Weight-reducing bits that are optional on the regular Ford GT, such as carbon fiber wheels, titanium lug nuts, titanium exhaust are standard on the Competition Series.

Of course the Competition Series has a few exterior details that true enthusiasts will notice right off and will help the Competition Series GT stand just that much taller over the regular production Ford GT. These include a unique gloss carbon fiber over body stripe, mirror caps, and A-pillars, as well as exposed carbon fiber lower body trim in matching gloss finish. Inside, the Competition Series maintains the lightweight interior and keeps the same driver-centric elements of other Ford GTs, including the F1-styled steering wheel with key functional controls. Ebony Alcantara suede is used on the seats, instrument panel and headliner. Exposed carbon fiber accentuates the console, registers and door sills. Anodized red paddle shifters and instrument panel badge bring accent color to the cabin, while a unique center console plate and steering wheel fascia account for the deleted infotainment controls and screen.

The Competition Series will be offered in six standard Ford GT colors: Shadow Black, Frozen White, Ingot Silver, Liquid Blue, Liquid Grey, and Triple Yellow. Production of the Competition Series is available in North America for all announced production years. The Competition Series Ford GT will headline Ford’s display outside Turn One at the 2017 Daytona 500 this weekend. Visit FordGT.com to view exterior and interior options or to configure your own Ford GT supercar.