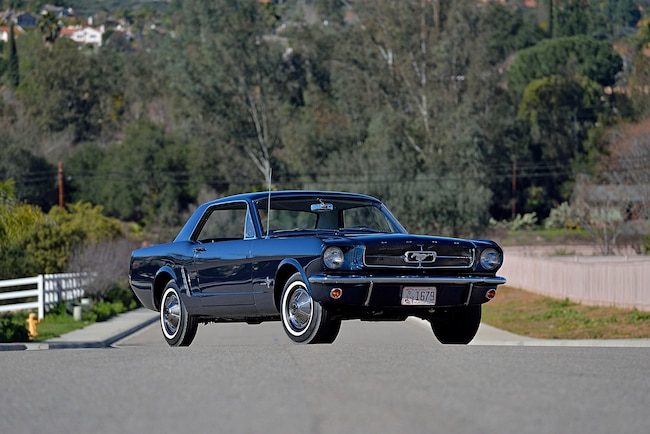 A significant piece of Mustang history will cross the auction block at Dana Mecum’s Spring Classic in Indianapolis this May: The first Mustang hardtop to receive a VIN (5F07U100002), and the first hardtop released for public sale.

Those are just two of the many “firsts” this car represents. It was also the first six-cylinder Mustang, the first with a three-speed manual transmission, the first painted Caspian Blue, and the first pre-production Mustang sent to Canada for retail sale.

Ford collector Bob Fria spent two years restoring the first Mustang hardtop to its original condition. He learned so much about early Mustang production that it spawned a book, Mustang Genesis.

We have Mustang historian, collector (and Mustang Monthly contributor) Bob Fria to thank for compiling the facts that make up this car’s provenance. The car passed through 12 owners before Bob bought it in 1997, and none of them was aware that this car represented a significant milestone in Mustang history. To them it was just transportation, often used in the sub-zero weather of Canada’s Yukon Territory.

How did it wind up in the Great White North? Let’s back up a bit, to the months leading up to the Mustang’s introduction. Starting in the fall of 1963, a number of Mustang pilot cars were hand-assembled at Ford’s Allen Park Pilot Plant as proof-of-concept vehicles. This car’s assembly began there in January 1964. Just a handful of those pilot cars, the hardtop among them, were then shipped to the Dearborn Assembly Plant to become part of a small fleet of pre-production vehicles. It was at Dearborn that the hardtop’s chassis was assigned its VIN.

According to Bob, the hardtop was completed as one of about 180 pre-production cars made before official Mustang production began on March 9. Of those, three of the pilot plant cars were included and are known to exist, including Mustang No. 1, a white convertible that is displayed at the Henry Ford Museum in Dearborn.

Like so many of the early Mustang’s chassis and driveline components, the 170ci inline-six was sourced from the Falcon parts bin.

That convertible was sold—prematurely—to a Canadian pilot who at first refused Ford’s request to buy it back. (He later traded it for the millionth Mustang in 1966.) The first hardtop Mustang also went to Canada. Intended for a dealer in Vancouver, it was lost in transit and ended up in the Yukon Territory, missing the Dealer Grand Debut on April 17, 1964, as a result.

(Wondering why those early serial number cars were in Canada? Ford wanted to be sure as many North American dealers as possible had a Mustang in their showrooms for the car’s debut, so those cars that came off the assembly line first were sent to the dealers farthest away.)

Whitehorse Motors took delivery of the hardtop and used it as a demonstrator for a year, finally selling it in the spring of 1965. For its $3,200 (Canadian) selling price, the new owner received a Caspian Blue Mustang with a blue interior, 170ci six-cylinder engine, three-speed manual transmission (with a non-synchro First gear), and three factory options: an AM radio, backup lights, and 6.50x13 white sidewall tires. The dealer added a block heater.

The Mustang’s six-cylinder was joined to a three-speed manual transmission, also used in the Falcon and Comet.

Thirty-some years later, when Bob Fria bought the car, it was a tired Mustang in need of a restoration. Noting the low VIN number, Bob began researching its history, and over time compiled what he describes as a “5-inch-thick binder” of documents and paperwork on the Mustang. In the process he talked to nearly every one of the car’s previous owners, “and nobody knew what it was. No one understood its significance.”

He did, though. So during the car’s restoration, he was mindful to pay attention to “what was originally correct” on what was essentially a hand-built pilot vehicle. “I did the research as to what parts and pieces were used, and then duplicated that. If there were bad welds, I retained all of that because that’s the way it was built. Nothing was changed. The paint, the primer colors, the division lines between the black and the body color, all of that was done as it was done in the factory.”

The Mustang’s blue bucket-seat interior was minimally optioned with just an AM radio.

Bob did most of the work himself, farming out just the paint and bodywork and the engine work. The restoration took two years.

Once it was done, the first hardtop “was busy,” says Bob. “It’s been used by Ford Motor Company for various events. It was displayed in Dearborn for Ford’s 100th anniversary. It’s been in the Petersen Museum, and displayed at the Nethercutt Collection.”

The hardtop was one of a handful of Mustangs assembled at the Allen Park Pilot Plant to test manufacturing processes. Then they were sent to Dearborn Assembly, where the chassis received their VINs and the cars were finished.

The significance of this car can’t be overstated, Bob feels. “One of the things people need to understand about this car is that it’s not only the first Mustang hardtop, it started the ponycar revolution in U.S. automotive history. It was because of this car that the whole rest came along—the Camaro, Firebird, Cougar—back then and up until today.”

After being its caretaker for so long, why is Bob parting with the historic Mustang? “It’s time to move on to something else and let someone else enjoy the car,” he explains.

That “someone else” could be you. Mecum’s Spring Classic takes place May 16-21 at the Indiana State Fairgrounds in Indianapolis. To learn more about the first Mustang hardtop, and how to attend the sale, visit mecum.com.

The first hardtop was supposed to be shipped to Vancouver so the Ford dealer there could have a Mustang in his showroom on the car’s debut day in April 1964. It was shipped to the Yukon Territory by mistake, and missed its coming-out party.
Imagine driving on these spindly bias-plies during a Canadian winter. According to Bob’s research, the car spent some three years driving around a remote Yukon silver mine. 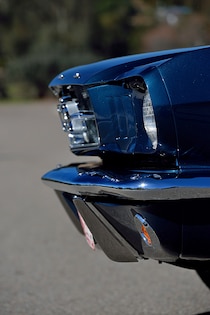 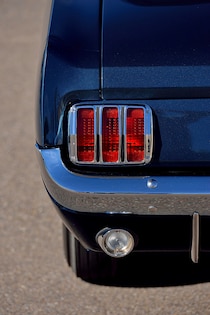