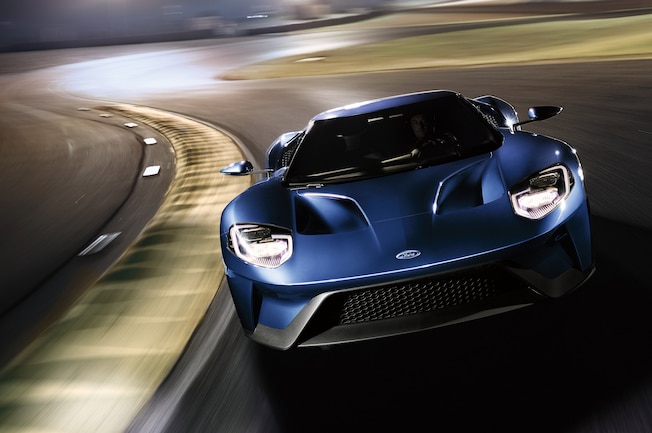 If you’ve been reading and following Muscle Mustangs & Fast Fords for any length of time, you know the name Dan Schoneck. He’s more famous for his drag racing exploits, power adder knowledge, and his company Schoneck Composites; however, most recently he has become obsessed with Ford’s GT supercar. He owns a couple of previous generation Ford GTs, but sadly for him, he wasn’t on the list to receive a new 2017 Ford GT. That’s a shame, but if we can’t have one, neither can he.

Ford’s GT supercar is the car to take on the world’s elite, and was designed to harken back to the days when Ford’s GT40 beat Ferrari to win Le Mans four years in a row from 1966 to 1969, including a 1-2-3 finish in 1966. The 2005-2006 Ford GT followed in the GT40’s footsteps, and those cars have already reached legend status. Carrying a 550hp 5.4-Liter modular four-valve engine with a Lysholm twin-screw supercharger in its mid-section, it was capable of a 0-60 time of 3.3 seconds and a 205 mph top speed.

Over 10 years later, and the Ford GT is finally back. Of course, thanks to technological advances the new 2017 Ford GT tops the previous version by leaps and bounds. This time around it has a 647hp 3.5-Liter twin-turbocharged EcoBoost V-6 to haul around its carbon fiber monocoque-constructed body featuring an integrated steel roll cage and aluminum substructure.

The Ford GT’s dry weight of just over 3,000 pounds, combined with a 647-horsepower, twin-turbocharged 3.5-Liter EcoBoost V-6, means the car has world-beating capabilities. With a 216 mph top speed, it’s no wonder the road-going version shares much of its character with the track version, which was hugely successful in 2016.

“The Ford GT is all about performance,” said Raj Nair, Ford executive vice president, global product development and chief technical officer. “We achieved considerable weight savings with the carbon fiber architecture. We then reinvested some of that savings into where it counts most–performance, specifically, the active dynamics. The result is an even faster car.”

The new Ford GT is the fastest production car to wear a Ford emblem, and like Dan Schoneck, we want one. Where’s the nearest plasma donation center?