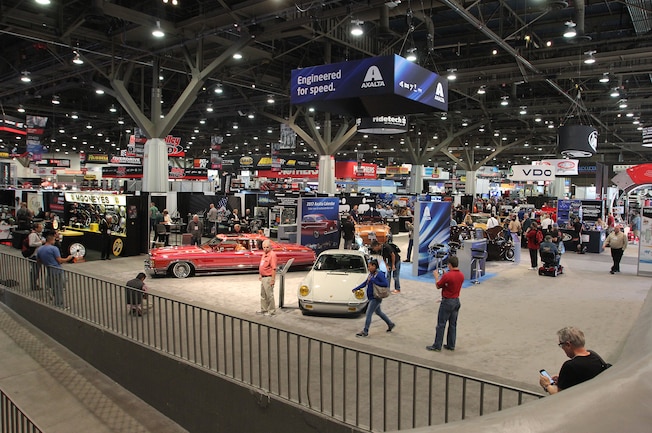 If a new part isn’t found at the SEMA Show, chances are you don’t need it for your Mustang. The giant annual show in Las Vegas is where all manufacturers post up their new products and try to get more publicity on existing product lines and components. From exterior accessories to hardcore performance products, SEMA has it all—and a lot of it. The Las Vegas Convention Center is overrun with products, cars, and drifting displays by Vaughn Gittin, Jr. and Justin Pawlak, among others.

SEMA is an event where the stars of your favorite automotive TV shows come to check things out and sign autographs as well. There are private parties, product unveilings galore, and celebrities at almost every turn. SEMA is the place to be.

Because of the show’s sheer size, it is impossible to see every product on the show floor, but we were able to wrap our heads around a few products designed to make your Mustang, or other Ford product, quicker and faster than what is in the other lane.

You aren’t a Mustang enthusiast if you’ve never had an Edelbrock (edelbrock.com, 310.781.2222) component on any of your cars. The company has so many go-fast goodies that not having any of those component on any of your Mustangs means you haven’t done your homework on what works and what doesn’t. We all know that boost works on our Mustangs, and Edelbrock has both an E-Force supercharger and a new Victor 5.0 intake aimed at 2011-2016 Mustang GTs, along with Coyote-swap cars. Edelbrock’s Victor 5.0 intake for Coyote engines is a long-taper, crossover-style runner design with a large plenum designed for ultimate performance. The cast aluminum Victor 5.0 intake is ideal for nitrous applications or boosted combinations. It even has provisions for various nitrous nozzle locations. So if you like your power from a bottle, the Victor 5.0 intake has you covered.

Always a crowd favorite among Ford fans, the Ford Performance (fordperformance.com, 800.367.3788) booth had a bevy of packages ready to install in your Mustang. One swap kit gaining steam in the aftermarket is the Mustang’s EcoBoost 2.3L four-cylinder, but Ford Performance is taking it up a notch by including a Tremec T56 with the engine and control pack for a one-stop swap. Similar to the Coyote engine and transmission packages (or modules, as Ford Performance calls them), the 2.3L engine and transmission module is designed to make it easy to swap in the Mustang’s 305hp 2.3L EcoBoost under the hood of whatever the end user decides. The module contains the 2.3L EcoBoost engine, Tremec T56 transmission, and Ford Performance control pack. Designed obviously for rear-drive platforms, this module would be a blast in a Fox Mustang.

Someone you may not have heard of for driveline equipment, GForce Performance Engineering (gforce1320.com, 316.260.8433) is the manufacturer of record for Ford Performance’s 2015-2016 Mustang GT half-shafts. Therefore, GForce has many other components aimed at improving driveline reliability. The company has entry-level half-shafts for 2015-2016 Mustangs along with the aforementioned 1,500hp-rated Ford Performance half-shafts. GForce also has aluminum and carbon-fiber driveshafts and even a fully fabricated 9-inch IRS for S550 applications. This is a complete bolt-in independent rear with a fabricated housing, GForce’s Outlaw half-shafts, 35-spline inner stubs, new outer stubs, and your choice of driveshaft.

More Coyote parts were on display at Holley Performance Products (holley.com, 866.464.6553). The company has just finished a successful year in NHRA Pro Stock with its EFI packages, and is basking in the glow of the Sniper EFI intake program as well. Holley’s Sniper EFI intake for 2011-2016 Mustang GTs and Coyote swaps has been hugely successful. The Sniper EFI intake is a TIG-welded aluminum intake featuring a 90mm throttle-body opening, and it comes with fuel rails as well. The Sniper EFI’s intake features runner lengths with a tapered top, which are designed to increase velocity and evenly distribute air to each cylinder.

The 6R80 automatic transmission in today’s Mustang is light years better than the AOD from the Fox era. The transmission is geared to keep the engine in its powerband and, in many people’s eyes, is a better choice than a manual transmission. The major hit against the 6R80 was the lack of a trans brake. Now with LaunchMAX from JMS Products (jmschip.com, 601.766.9424) you can have a trans brake for your 6R80-equipped Mustang or F-150. Available in either plug-and-play or spliced-in configurations, LaunchMAX is easy to install (especially the plug-and-play version), and JMS says it’s the fastest trans brake release on the market. LaunchMAX is an all-digital product, with zero internal parts or relays to fail, and it can even be configured with a custom JMS tune file via an SCT handheld.

Coyote-swaps continue to take over the Mustang market. Unfortunately, many swaps don’t benefit from the addition of power steering, and even more are void of A/C. RAB Performance Parts (rabperformance.com, 909.889.2124) has this new Coyote A/C and power steering arrangement, which should be available in the first quarter of 2017. RAB is still configuring the accessory drive setup, but the company says it will most likely be based on a single bracket for both the power steering pump and A/C compressor. No word on hoses or lines for either at this point, but when we know more we will pass that info on to you.

Ever since they were brought to market, the EcoBoost Mustang has made a big splash, so much so that there are more than one running in the 9s. The EcoBoost has surely proven it can make the power, and SPEC (specclutches.com) has a clutch available for that big power. SPEC actually has a clutch for the little dynamo in seven different stages from mild to obviously wild up to 685 lb-ft of torque. SPEC’s clutch can either be used with the stock flywheel or one of the company’s billet aluminum or billet steel flywheels. SPEC’s EcoBoost clutch’s pressure plate is all billet.

We caught a glimpse of Thermal R&D's (thermalrd.com, 888.284.3762) exhaust displays, and a few of them looked familiar. That’s because Thermal has exhaust systems for 2015-2016 Mustangs, 2012-2015 Focus STs, the 2016 Focus RS, and 2014-2016 Fiesta STs. The Mustang system is a 3-inch after-cat exhaust featuring polished 4 1/2-inch angle-cut tips, a straight-through muffler design with rear-mounted resonators to control drone, and adapters for those running long-tube headers. The Focus ST component lineup includes a 3-inch downpipe and exhaust with a Helmholtz resonator to keep drone at bay. Thermal’s newest system is for the Focus RS, and that system is similar to the Focus ST except that it features dual outlets to follow along the RS’s exhaust routing. The ST system features a single center outlet. Thermal’s Fiesta 3-inch system features a dual-tip exhaust and the same measures taken to control exhaust drone.