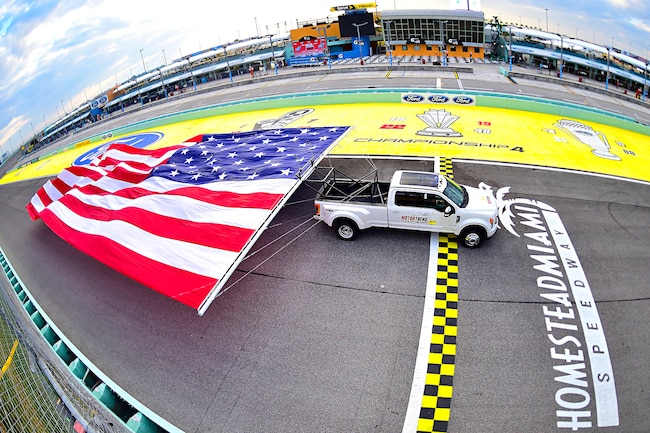 Ford snatched the Guinness World Records title back from General Motors recently by pulling the world’s largest flag around the Homestead-Miami Speedway during Ford Championship weekend. The title for the World’s Largest Flag Pulled by a Moving Vehicle was accomplished with a new 2017 Ford F-450 Super Duty pulling a 4,124 square foot U.S. flag. The previous record, held by the Chevrolet division of General Motors was with a 40x80 foot flag at Texas Motor Speedway earlier this year. The 2017 F-450’s 6.7-liter Power Stroke turbo diesel V-8 produces a best in-class 925 lb-ft of torque and 440 horsepower, giving it ample grunt to carry an even larger flag for this record attempt.

A ground support crew of 20 helped to unfurl the flag and ensure the flag never touched the ground, a requirement for the Guinness record attempt and of course proper flag etiquette.

“At Ford and with Ford trucks in particular we are used to being number one,” said Doug Scott, Ford Truck Group Marketing Manager. Towing the largest banner here today and setting the Guinness World Record in the category certainly fits with our DNA and what we are all about when we talk about Ford trucks and their towing power. This is a great accomplishment, another to add to the list of distinctions. Earlier this week we received the 2017 Motor Trend Truck of the Year award so we will add this to the list.”

The laps around Homestead-Miami Speedway in the 2017 F-450 Super Duty included a full brace of 2017 F-Series truck products led by the upcoming 2017 Ford F-150 Raptor.

Ford is no stranger to patriotic displays at Ford Championship weekend, utilizing the F-Series line of trucks to fly the U.S. flag as part of pre-race activities since 2003. However, Saturday’s practice session for Sunday was special, as the United States flag flown by the F-450 Super Duty for the record-setting drive measured 45x92 feet. To set the record, the truck had to travel beyond the 100 meters (328 feet) of the previous record mark, without the flag touching the ground. The Ford F-450 Super Duty exceeded that requirement with ease, officially covering a verified distance of 109 meters (360 feet) and also completing four full laps around the Homestead-Miami Speedway’s 1.5-mile oval, site of NASCAR’s championship event, Ford Championship Weekend. To accomplish this record setting flag pull attempt, 45-foot riggings from eyelet to eyelet were constructed, enabling the F-450 a driving roll-out of the massive flag. A team of 20 ground personnel launched and retrieved the flag, ensuring the flag never touched the ground.