A behind-the-scenes look at the Sunday before SEMA, when the companies set up their booths and bring in the display cars 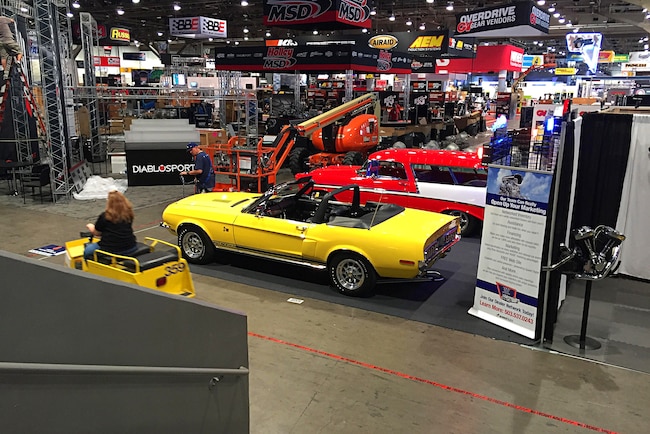 The SEMA organization tells the story best: “It all began in 1963 when a group of small manufacturers who were suppliers of performance equipment for early hot rods organized their fledgling industry and called it "Speed Equipment Manufacturers Association" (SEMA).

“The mission was practical and straightforward: develop uniform standards for certain products used in motorsports competition; promote the industry as a supplier to consumers involved in constructive activities of recreational and hobbyist value; develop programs to encourage improved business practices among member companies; and hold regular meetings to achieve unity as a business organization. In those days, all of the members were founders of companies that produced speed equipment exclusively (hence, the organization’s title).

At the outset, the pioneering companies operated free of the constraints that come from governmental regulations and their attending restrictions. They were as aggressive and progressive as their imaginations would allow, and the mostly small businesses flourished. Today, many of the original companies are very large, successful corporations, and some, such as Edelbrock, Ansen, B&M, and Offenhauser, are known internationally for their product lines. Today, more than 40 years later, the small group of entrepreneurial operations has been joined by thousands of companies, designers, producers, and suppliers of specialty products that span the gamut. From performance products for street and race applications to appearance accessories for late-model automobiles and light-duty trucks, SEMA-member companies contribute to the vitality and strength of a $29.9-billion-a-year retail industry.

“SEMA eventually became the Specialty Equipment Market Association, embracing within its ranks all businesses in the distribution chain: manufacturers, warehouse distributors, jobbers, independent retailers, volume retailers, specialty stores (speed shops), sales agents, subcontractors, and publishing companies. The membership categories even include racing teams, car clubs, and special service organizations. The SEMA membership roster has steadily grown and continues its upward climb. Today there are more than 6,382 corporate members. Products supplied by the industry are in demand not only in the United States, but also throughout the world.”

Stay tuned for more all week long, and enjoy this look before the show puts its shine on.