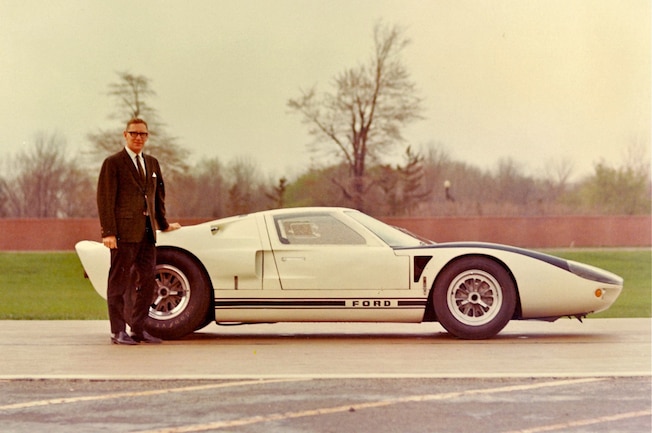 The man who led the teams at Ford that designed, engineered, and developed the GT40s that won Le Mans from 1966 through 1969 was honored earlier this year by the Automotive Hall of Fame in Dearborn, Michigan. Since its founding in 1939, the AHF has honored nearly 800 men and women from around the world for outstanding automotive achievements.

Roy Lunn and his wife of almost 70 years, Jeannie, drank a toast on June 19, 2016 to celebrate the 50th anniversary (to the day) of what is probably the most iconic event in modern auto racing history—the One-Two-Three finish of Ford’s GT40 Mark II-As, raced by Bruce McLaren and Chris Amon, Ken Miles and Denny Hulme, and Ronnie Bucknum and Dick Hutcherson, to win the 24 Hours of Le Mans; changing the face of sports car racing. It was the first overall win for an American carmaker at Le Mans and ended Ferrari’s domination of endurance racing. Roy still has the letter he received from Don Frey, Ford vice-president and Ford Division general manager dated June 28, 1966, praising his efforts. “I want to congratulate you on your creative role in the historic Ford victory at Le Mans and winning the World GT Championship.”

The GT40 was not Roy Lunn’s first Le Mans racecar project. He was Assistant Chief Designer at Aston-Martin from 1947 to 1949 and in 1949 built two DB2s that ran in the first postwar 24-hour race at Le Mans. In 1953 he joined Ford of England as an engineer and product-planning manager and in 1958, moved to the U.S. and a position in Ford Central Advanced Engineering. Between 1958 and 1969, his positions included head of the Advanced Vehicle Department and Advanced Concepts Group. Some of the projects he was responsible for included the Big Red Gas Turbine Superhighway truck, the Flying Car Concept, and most notably for us Mustang enthusiasts, the mid-engined Mustang I concept.

Today in his home office in Florida Roy is surrounded by accolades, memorabilia, and collectibles. Note the Mustang 1 diecast and old black and white Mustang 1 images on the wall behind him.

He left Ford in 1969, but still had his hands in Ford’s Mustang as Vice-President, Engineering at Kar-Kraft where he oversaw production of the Boss 429 Mustang and development of Mustang concepts with mid-mounted 429 engines. In 1971, Roy Lunn was recruited by American Motors to be technical Director of Jeep, later elevated to Chief Engineer of AMC and President of Renault-Jeep Sport. Roy later served as Chairman of the Technical Board of the Society of Automotive Engineers (SAE) in 1982-1983 and was also a member of the Board. He was elected a Fellow of the Society in 1983.

Before retiring in 1985, he had been responsible for the first production unibody SUV, the Jeep XJ Cherokee; the first production four-wheel-drive passenger car, the AMC Eagle, the AMC-Renault E-Car Concepts and development of the Jeep 4.0-liter engine. He also centralized all AMC-Renault competition programs in the U.S. and developed the first SCCA Spec-racing car in 1983, the SCCA Sports Renault. After retiring from AMC in 1985, he joined AM General as Vice-President, Engineering, heading the HUMVEE compliance program for the Pentagon. He retired again in 1987.

At 91 years old, Roy is still working on automotive projects. The British-born engineer, designer and disrupter is also a futurist. He has been working on a next-generation; environmentally sound “people’s car” for a few years. “What I am doing is at least 60 years away and involves the use of materials that are reproducible, including fuels vehicles will run on. There is no metal. It has to come from nature’s cycles—air, wind, and sun—or grown as a recyclable crop.” It’s unquestionably Roy Lunn’s most disruptive project yet. As far as he’s concerned, retirement is highly overrated!

As the Godfather of the original GT40, Roy certainly enjoys spending time around Ford’s 2005/2006 GT supercar when he spots them at events.