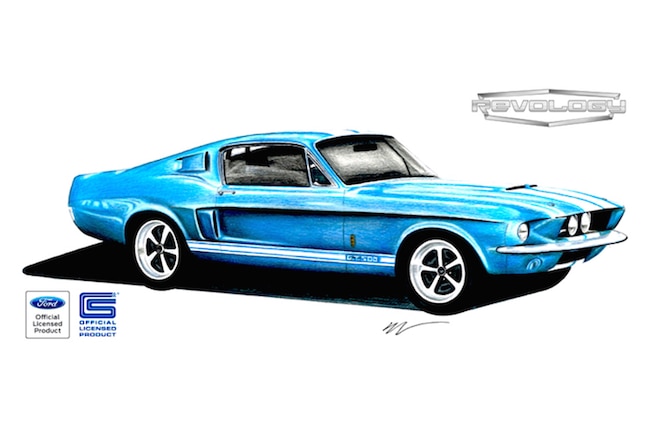 Revology Cars should be well known to our readers by now. Over the last few years we've been able to watch as Head Revologist, Tom Scarpello, worked tirelessly to build upon his idea of all-new 1965 and 1966 Ford Mustang replicas. Tom's idea of a turnkey Mustang replica built with all-new parts, including the body itself, has become a reality with dozens of cars being built for customers all over the globe. The recent news of Revology Cars obtaining official licensing to build a replica 1966 GT350 had many wondering what else might be in store. We've asked Scarpello several times whether Revology Cars would move up to the 1967-1968 body style, and eventually the 1969-1970, and so on. In those early interviews we had there was certainly an interest to move forward with expanding into these years, and today Revology Cars has announced they are ready to move forward, launching a 1967 Shelby GT500 replica that will be available sometime in the summer of 2017.

The 1967 GT500 is one of the most highly sought after Shelby models. With its reproduction Shelby GT500, Revology will follow its proven formula. “We carefully integrate modern technology to improve performance, reliability, durability, fuel economy, safety, and comfort,” Tom Scarpello, president and founder of Revology Cars, says, “while retaining the essential character and style of the original design.”

For months enthusiasts have been excited by rumors of a 1967 Shelby GT500 coming from Revology Cars, but the company has kept quiet until now. “We needed to focus on the launch of our 1965 and 1966 models, which went into production last fall,” Scarpello says. “Now that production is running smoothly, we are able to turn our attention to new models.”

At this time full specifications and options for the new 1967 GT500 model have not been solidified and will be released later. However, we do know that the GT500 will be powered by Revology's standard engine package, which is the Ford Performance 435hp 5.0L DOHC Coyote modular V-8. This is the same engine found in the current 2015 and up Ford Mustang. We'd speculate that the traditional Tremec five- and six-speed transmissions will be backing it and quite possibly a performance-bred automatic.

“The Coyote is a perfect engine for the GT500,” Scarpello says. “It has it all … power, torque, and light weight; smooth, and high-revving. The Coyote is a technological tour de force.” With roughly 1.7 times the power of the original 428ci V-8 in a car that weighs 550 pounds less than a modern Mustang GT, the Revology GT500 has a more favorable power-to-weight ratio than a Ferrari 360 Modena. But Scarpello insists the Revology GT500 is not just about performance. “These are seriously fast cars, but we don’t just build ‘numbers’ cars. Our cars are made to be capable in all conditions. Even crawling along in stop-and-go traffic in 110-degree heat, you and the car are OK. Combining classic styling, sound, and feel with modern comfort and reliability, we have produced a very, very special car.”

Revology Cars is one of only three companies worldwide licensed by Shelby American to build authorized reproductions of the vintage ’60s Shelby GT350 and GT500 automobiles. Of the three, Revology Cars distinguishes itself through the thoughtful integration of the most advanced technology and materials available. For example, Revology is the only licensed manufacturer to use exclusively the state-of-the-art 2016 model Ford Ti-VCT DOHC V-8 engine in its Shelby models. Each Revology Shelby GT500 will be documented in the Worldwide Shelby Registry.

Details on pricing and availability have not yet been announced. Interest is so high on current Shelby licensed Revology replicas that Revology is accepting preorders for the Shelby GT500 now. To secure a production spot, a client must place a $10,000 deposit. Production will be reserved in the order deposits are received. The deposit is fully refundable, should the client decide not to follow through with the order. The Revology GT500 will be built at Revology’s Orlando, Florida, factory, on the same production line that builds the Revology Shelby GT350 and Mustang replicas. Prices of the Revology Shelby GT500 will be announced closer to the introduction date. However, enthusiasts can expect the GT500 to be priced similarly to the GT350 models, which, incidentally, is very close to the value of the originals.

Why own a reproduction Revology GT500 instead of an original? Says Scarpello: “The original is going to sit in your garage. You can drive the Revology anywhere, anytime. It really depends on where your priorities are.”

In addition to the Shelby GT500, Revology offers a complete lineup of reproduction 1964½-1966 Mustangs. Complete information, including pricing, can be found on the Revology website at www.revologycars.com or by contacting Revology Cars directly at (800) 974-4463.