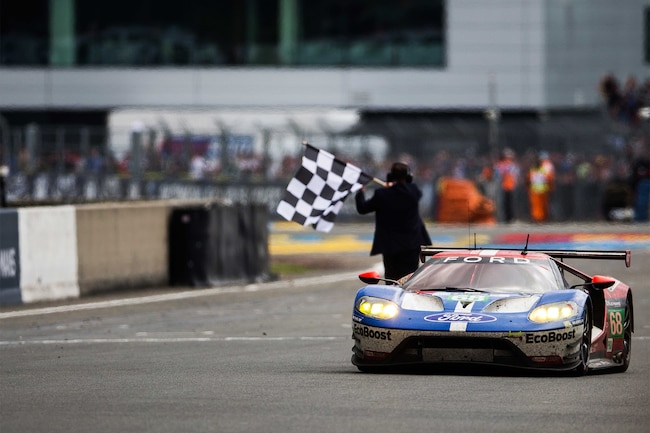 How do you celebrate the 50-year anniversary of kicking Ferrari’s butt at the 24 Hours of Le Mans? By doing it again, of course. The No. 68 Ford GT, piloted by Joey Hand, Sebastian Bourdais, and Dirk Müller took the podium in the GTE Pro class early this morning, cementing the prowess and determination of the entire Ford GT team.

The race was not without its nail-biting ups and downs as the No. 82 Ferrari, the No. 68 Ford GT duked it out, lap after lap, rekindling the 50-year-old rivalry between Dearborn and Maranello. It wasn’t until the 20th hour of the race that Hand took the lead for the final time.

“It’s a big deal to come back here 50 years after Ford won in 1966,” said Hand. “We said we wanted to win but to actually do it is huge. This team has come so far in a short space of time. They all worked hard, right through Christmas and New Year and gave us a race car that we can race hard. We drove like it was a sprint race for 24 hours. I’ve won a lot of races and this is a big one.”

“It’s an unbelievable feeling to be able to make this happen,” said Bourdais. “There was so much effort, so much emotion, and to be the one that wins the trophy to give to the Ford family and everyone involved is very special.”

Who could have guessed that 50 years from the date that Carroll Shelby and Henry Ford II, created a literal dream team of cars and drivers to put the smack down on the Maranello boys, that they’d ever do it again. It was 1966 that Ford finished 1-2-3 at the historic French endurance race, and this year, they came close to a repeat with a 1-3-4 finish.

Crossing the finish line of Circuit de Sarthe, the track the 24 Hours of Le Mans takes place at, marks the finish of a campaign that began in January of 2015 when Ford pulled a silken sheet off the GT Supercar – a project they had done a remarkable job of keeping under wraps.

“Building a new car and racing it at Le Mans is a monumental task,” commented Ford Motor Company president and CEO, Mark Fields. “We took it on and we conquered the biggest challenge in sportscar racing: the Le Mans 24 Hours.

In under two years time, the team at the Blue Oval designed a clean sheet vehicle that blasted some of the top driver’s and racing vehicles in the world out of the water; and in Ferrari’s own backyard, no less.

Does this mark the point where the Ford GT teams drive off quietly into the sunset and the pages of history books? Of course not! The IMSA Ford Chip Ganassi Racing team is flying high all the way back to the US for the next round of the WeatherTech SportsCar Championship at Watkins Glen on July 3 to do it all again.