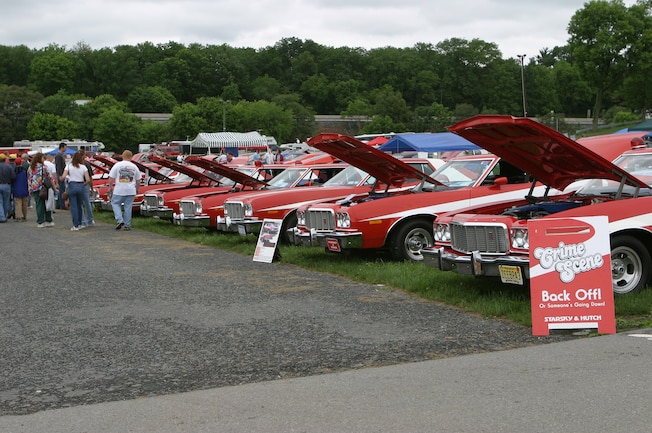 While we’re huge Mustang fans here at Mustang-360, we’re also diehard Blue Oval people that enjoy all manner of Ford cars and trucks. We’re also old enough to remember great 1970s and early 1980s television shows that featured lots of Ford iron “back in the day.” One of the most popular television cop shows of the era was Starsky & Hutch. This crime fighting duo kept the streets of fictional Bay City, California clean while driving around in David Starsky’s 1975 Ford Gran Torino—affectionately called the “Striped Tomato.” Decades later enthusiasts of the show, and of Ford’s Torino platform converge on the Carlisle Ford Nationals grounds each year to meet up, park together, and reminisce about the show, the cars, and the actors.

Carlisle Ford Nationals weekend is this June 3-5, 2016 at the Carlisle, PA Fairgrounds and by all accounts is one of the biggest annual all-Ford themed events. There are opportunities to meet representatives from Ford, test drive Ford’s latest products, have Ford experts handle part installs, a massive swap meet and midway, the National Parts Depot Showfield of over 3,000 cars, and of course the cars for-sale corral. That’s where even more awesome Fords are for sale by owners looking to move some metal and make room for new projects.

Typical themed displays and anniversaries abound, including Broncos, Pintos, Roush vehicles, Mystic Cobras, all 1966 Fords, and of course the Torino; but not just any Torino, the Starsky & Hutch Torino. Starsky & Hutch, which ran from 1975-1979 and aired on ABC for 93 episodes, featured actors Paul Michael Glaser and Antonio Fargas. In order, they played David Starsky and Huggy Bear. Carlisle Events is excited to welcome these two as they join guests from the world over to celebrate the show and their beloved “Striped Tomato.” Dozens of Starsky & Hutch Torinos, including more than a few that are certified “Hollywood Cars,” meaning some were used during the TV show, while others were used in the 2004 movie that started Ben Stiller, Owen Wilson, and Snoop Dogg, will be in attendance on the show grounds. The cars and actors will join the Starsky & Hutch Torino Club for the weekend at Carlisle and will be found on the east side of the grounds near Building Y. Complete details about the event and display is available at carlisleevents.com.