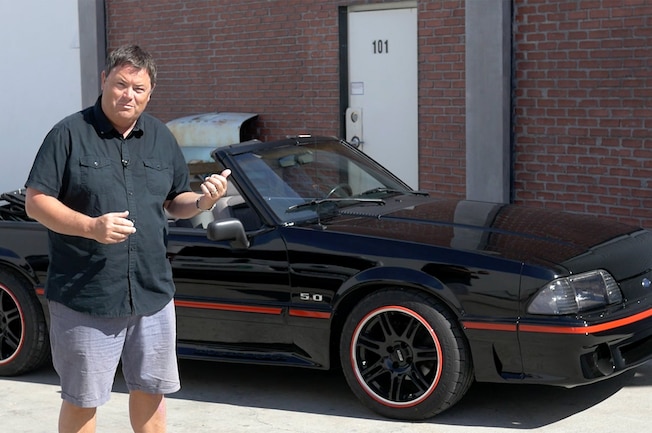 The Velocity Network’s California-produced Wheeler Dealers episode in which show stars Mike Brewer and Edd China hunt down, restore, and flip a 5.0 Fox-body Mustang will not air until next summer, but thanks to Mike Brewer, Muscle Mustang & Fast Fords readers are getting first shot at buying this gloss black beauty way ahead of time.

If you want the 5.0 act now! For a mere $9,000 or best offer, anyone reading this news item can contact Mike Brewer at wheelerdealers@wilmatvinc.com and if you strike a deal, you can drive home an honest-to-goodness star car. As on all episodes of Wheeler Dealers, the buyer of this 1988 5.0 Mustang drop top will appear with Brewer on TV as the deal is transacted.

If you missed hearing it in the soundtrack, all of the performance upgrades performed on the 1988 Ford Mustang 5.0 stick-shift convertible were done using emissions-legal parts with a CARB EO number, making the Fox 50-state compliant. That means it is smog legal anywhere in the United States, plus anywhere requiring compliance with California emissions standards.

When we asked Brewer about the possibility of viewers being able to buy other cars featured on Wheeler Dealers, he asked us to quote: “Great news, everybody. We are inundated with people who would like to buy cars from the series, we can now offer the cars that we have in production for our American season. Just contact the email above if you are serious and they will get back to you.”