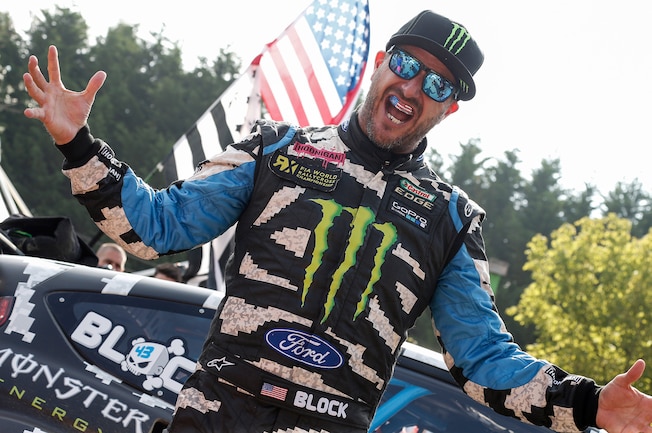 Where else can a bloke watch every installment of Hoonigan Ken Block’s Gymkhana series in such an easy-to-use format and absolutely free of charge?

For those three or four Earth inhabitants who might not be familiar with Mr. Block, we offer a brief biography.

Ken Block was born in Long Beach, California, in 1968. He has always been involved in sports starting from a very young age, maybe even before he was born. Among Block’s earliest of athletic endeavors was shooting the poles on a steel-wheeled Roller Derby skateboard at local grammar schools, where pursuing school authorities attempting to apprehend the young Block helped him to hone his rapid escape skills. Later in life Block pursued snowboarding, motocross, and skiing with an abnormally voracious appetite for winning.

Not disaffected from California, but leaving on his own terms, Block now lives in Utah in a stylish domicile complete with a private snowboarding park known as DC Mountain Lab. He has two dogs, Yuki and Bentley, plus a random assortment of feral critters indigenous to the vicinity. Thanks to a partnership with the Ford Motor Company Block owns a fierce Ford F-150 Raptor outfitted with caterpillar tracks to traverse snowy mountains at the drop of a checkered flag.

Block cofounded DC Shoes (not associated with DC Comics) in 2004, an active sportswear company renowned for its association with extreme skateboarding and snowboarding. After the business grew and was acquired by Quicksilver, Block stayed on as chief brand officer for several years.

The word gymkhana has its origins in a specific kind of horse racing, which involves timed events and racing in particular patterns. The most common type of gymkhana event is barrel racing, where riders on horses are timed on how quickly they can get around the course without falling from the horse. From horses, automotive enthusiasts adopted the sport and set up parking-lot gymkhanas where entrants spawned several currently popular motorsports including drifting, autocross, and the burnout pit.

What Are You Waiting For?

Click on any of the videos and start watching. And remember, those of you of minor age, do not attempt any of the following stunts with your mother’s car unless she grants permission.