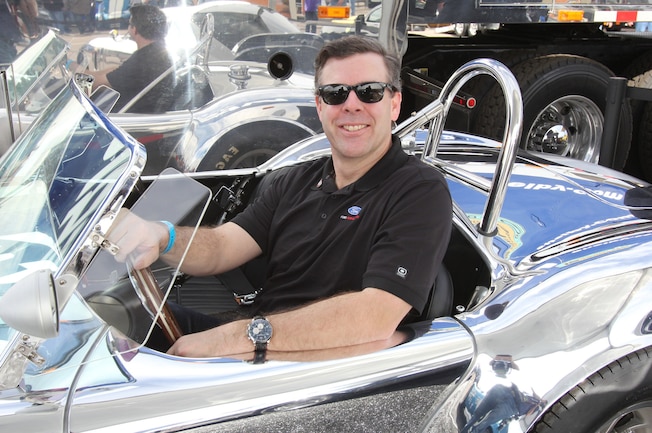 The year was 1962 when a burly, outgoing Texan named Carroll Shelby walked into Lee Iaccoca’s office at Ford Motor Company. Shelby was there for one reason, to pitch his Corvette killer Cobra project. A deal was struck and in no time AC Cobras fitted with small-block Ford 260 and 289 engines began winning. Equally important, they created a buzz—a buzz that translated into sales on the showroom floor.

Winning Cobras built the foundation for Carroll Shelby’s next big thing, the 1965 Shelby GT350 Mustang. It too was a smashing success and amazingly, 50 years later, Ford still builds the popular Shelby Mustang.

Shelby vehicles evoke enthusiasm and energy from Mustang fans worldwide. But equal in popularity to the Mustangs and Cobras, is the man behind the name, Carroll Shelby. Shelby endeared himself not only to executives, but also to enthusiasts, engineers and even PR people. The man was charismatic, forward thinking, and could send a charge of energy into any room or conversation. He was a leader, championship racer, and winning car builder—but to his family he was simply “grandpa.”

Perhaps few were closer to Carroll then his grandson, Aaron Shelby. Like his grandfather, Aaron stands well past six feet tall and presents himself with an endearing smile, proud handshake, an honest love for cars and a supreme passion for people. Aaron is the upcoming face of Shelby and perhaps no one is more prepared to keep the Shelby throttle held wide open.

We caught up with Aaron at the recent 45th Scottsdale Barrett-Jackson Collector Car auction, where we discussed his love of Mustangs, his grandfather and Shelby American. “I think like any kid back in the ’70s and ’80s, I had plenty of car posters on my walls,” Aaron explained. “My favorite, that I still have, is one of Gilles Villeneuve in his F1 Ferrari. I had a number of Cobra and Mustang posters as well,” he added.

“I started by going to my first race, my father’s Formula Ford race, and I just fell in love with cars and racing. I have been subscribing and buying car magazines since I was 10 years old and still read them cover to cover.”

As is expected, Aaron has a love for the classic Mustangs, but he’s equally impressed by the latest models. So much so, that he purchased a GT350 and he plans to hit the track with it soon. “It’s been great to watch the resurgence over the past 10 years in the Shelby brand, especially as Carroll [he refers to his grandfather as Carroll, but stated he was ‘Grandpa’ to all the kids in the family] and Ford strengthened their relationship. It was important for Carroll to see his legacy continue. He built not only a great brand with a loyal following, but an idea that is similar to the American dream, in that with enough hard work, enthusiasm, and a little luck, anyone can be successful.”

Even in Carroll Shelby’s passing, the Shelby name carries on—today with Ford’s GT350 and GT350R Mustang, and with every vehicle produced by Shelby American in Las Vegas. And that list is long, with a multitude of Shelby GT and Super Snake Mustangs, F-150 trucks, Cobras, Daytona Coupes and now the GT-40.

“I spent a lot of time with Carroll in Los Angeles when I was in college. We had a pretty good bond. He was grandpa, it was his moniker, and it’s what all the grand kids called him. He was a great guy and he loved kids. When he came over he brought candy and we talked about horses, and things like that,” Aaron told us.

“Today, we, as Shelby, should continue in this vein and keep an open mind to new ideas. Carroll was never afraid to fail when trying something new. As for myself, I will continue to be more present at events and be a ‘face’ for the Shelby brand. I plan to be at the MCA 40th Anniversary this summer, the Shelby Bash in Las Vegas in March, the LegacyTexas Shelby Car Show in June that I host in Dallas, and a number of other events. Between SAAC and Team Shelby, we have some great groups to keep the Shelby legacy going strong into the future. Over the next year I would expect to see my roll continue to grow as I work with Joe Conway and Neil Cummings on the direction Shelby should take.”

Aaron got his start attending races as a young boy, while watching his father compete. “My first professional race was the 1981 Long Beach Grand Prix,” Aaron stated. “I really enjoy going to any races. It is such a joy just to wander through the paddock and watch the activity. Carroll was the Grand Marshall of the Dallas F1 race in 1984. That was a lot of fun, but the way F1 is run today, it’s a wonder they actually held the race here in 1984. One of the best recent memories I have is being in Monterey in 2012 for the Historic races. The Cobra was already going to be the honored mark and then with Carroll’s passing that year, it was made that much more special. To see the Mustangs and Cobras racing around Laguna Seca was really something special. In addition, Ford went all out on the display they put together for Carroll and the history of the Cobra.”

Speaking of Cobras, we had to ask if Aaron has a favorite. “My favorite individual Shelby is the CSX2000, the very first one. There is something special about that car, not only because it was the first, but in thinking what that car went through for development and marketing.” Today, Shelby Cobra CSX2000 resides in Las Vegas at Shelby American, on display for all to see. “But really any of the 260/289 Cobras I am partial too,” he added. “They are fun to drive and represent where Carroll’s legacy began in the car-building world. If I were to have my pick of the litter, it would be a 289 because that was the first car. The 427 is a beast. Actually, dad’s got a 289 and it’s fun.”

But the new GT350 is not the only Mustang on Aaron’s radar. “You know, the last Boss was really nice, too.” He added. “I think they did a good job with that and the Laguna Seca.” And while Aaron doesn’t fancy himself a racer, he has plenty of on-track experience and he plans to get out there and exercise the 526 horsepower and 8,000-plus rpm potential of his new Shelby Mustang. “I’ve done school courses, including Bondurant and I’m planning to head to Vegas in March for the Shelby ride and drive. I would love to go back on track and have fun with it. I’d love to get my Shelby up to Tulsa as well. But more than driving, team ownership always appealed to me. Knowing how Carroll ran the race teams is intriguing and it’s impressive to see how you can be just as successful on that side of it. I love the whole concept of it. The planning, the racing, the strategy.”

We also asked Aaron to discuss the LegacyTexas Shelby Car Show he puts on each year. “I’m with LegacyTexas bank, its my full time job,” he said. “We do a Shelby car show every year in June. This will be the 7th Annual and it’s on June 11th. It’s called the LegacyTexas Shelby Car Show in Dallas. It started as a whim, in conjunction with SCAT, Shelby Cobra Association of Texas, but it’s really grown. We do it at what’s now the old bank headquarters and it lays out nicely for a car show. We get about 250 cars and around 2,500-3,000 people.”

“We do it the weekend before Mid-America Tulsa show and the Shelby guys don’t mind stopping by,” Aaron explained. “Last year we had a new GT350 and the year before that we had a 50th Anniversary Mustang. Sam Pack, of Sam Pack Ford Auto Group, helps out and brings some of his personal cars over. It’s gotten to be a bigger gathering and some incredibly rare Shelby’s come out.”