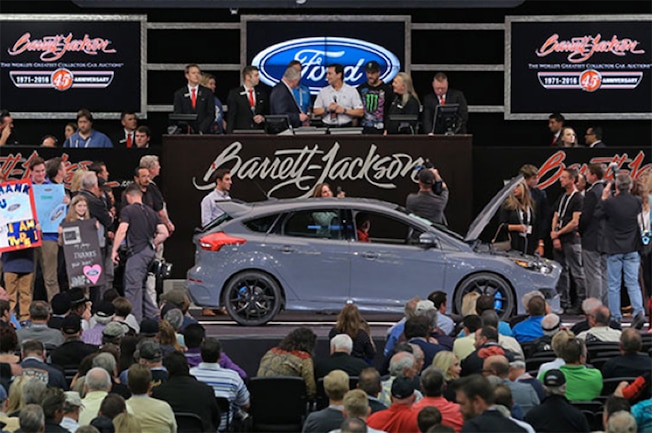 How much would you pay for the world’s rarest 2016 Ford Focus RS? Because of its one-off color, it is the only one of its kind and it just sold at Barrett-Jackson’s Scottsdale auction to benefit the Juvenile Diabetes Research Foundation for $550,000.

Checkout the other news outlets reporting the B-J sale and you will see the image of a Nitrous Blue 2016 Ford Focus RS representing the car, but the actual Lot #3009 one-of-one Focus RS that sold at Barrett-Jackson was finished in a custom blended pearlescent gray formulated for that particular RS.

MSRP on the 2016 Ford Focus is $36,605 with destination in the U.S., with the options list including lightweight wheels with track tires ($1,990), and the $2,785 RS2 Package that includes convenience parts like a power driver's seat, heated seats and mirrors, and navigation. Nitrous Blue at this point the most common color to spot a 2016 Focus RS in costs an additional $695.

The 2016 Ford Focus RS also comes standard with a 2.3-liter turbocharged inline-four engine good for 350hp and 350 lb-ft of torque, all-wheel drive with a torque-vectoring rear differential, and adaptive suspension dampers. Ford says the car will blast to 60 mph in less than 5 seconds.

Automobile stated, “All those parts add up to a stellar hot hatch. When we drove the 2016 Ford Focus RS last month, we found that, it unquestionably lives up to the RS billing. It does things… no other hot hatch we’ve driven can do."