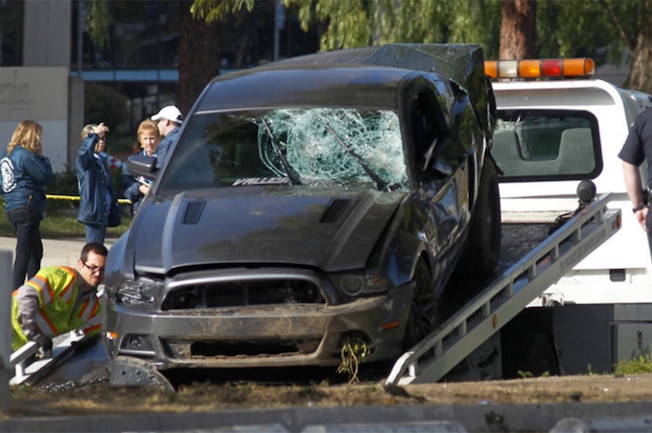 It’s never been a good idea to loan someone your car, and definitely not if they’re going to street race. The driver who killed two spectators during the course of an honest to gosh no reality TV cameras rolling street race was sentenced yesterday to 12 years in state prison, the Los Angeles district attorney’s office reported.

Gary Balyan, age 43 of North Hollywood, California driving a Gunmetal Gray Mustang GT didn’t make it very far from the line before he lost control in a fog of burning rubber, and mowed into a crowd of spectators.

As soon as things turned bad spectators fled the Canoga Avenue scene, but Thomas Wong and Eric Siguenza attempting to run were trapped by the Mustang and killed. A third man sustained serious injuries.

Valenzuela, who Mustang360 readers might recognize as having appeared on Street Outlaws was racing Balyan in a Nissan GTR. The Judge, Daniel Feldstern ordered the GTR destroyed and Valenzuela's driver's license suspended during his probationary period, said Ricardo Santiago, a spokesman for the district attorney's office.

The Mustang GT Balyan totaled, belonged to Henry Gevorgyan of Van Nuys. Gevorgyan pleaded no contest to two felony counts of vehicular manslaughter with gross negligence on December 24. Yesterday the Judge sentenced Gevorgyan to one year in county jail, three years' formal probation, suspended his driver's license and ordered the Mustang to be destroyed.