[UPDATE with Price] Is it Ugly or Unique? 1970 Ford Torino King Cobra at Mecum Now 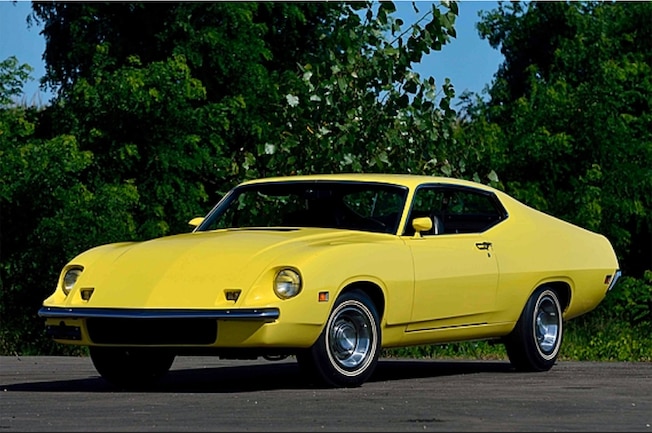 One of the world’s most expensive 1970 Ford Torinos crossed the auction last weekend at Mecum’s Kissimmee, Florida, auction for $525,000.

Isn’t it interesting how rarity can effect one’s perception of what is or isn’t ugly? Frankly if it wasn’t so darn rare we’d say the 1970 Ford Torino King Cobra going across the block at Mecum Kissimmee, Florida auction January 21, 2016 has a face like Frankenstein, but somehow… no.

While Ford had won the NASCAR Manufacturer’s Championship every year from 1963 through 1968, the Total Performance team entered 1969 facing a new threat from Dodge in the form of the slippery Charger 500. Ford Racing Director Jacque Passino had trick new machines of his own in the form of the long-nosed Torino Talladega and its Mercury Spoiler II counterpart, and a stable of drivers that included David Pearson, Richard Petty, Cale Yarborough, and LeeRoy Yarborough. When the Charger 500 proved inadequate, Dodge responded with the aerodynamic Daytona, but it was not enough to defeat the equally slick Talladega, and Ford locked up the Championship for the seventh-consecutive time in 1969.

As planning began for the 1970 season, Passino faced trouble from within Ford’s styling department, whose design for the new Torino had serious inherent aerodynamic shortcomings. Specifically, the new deep-set front grille would trap air like a parachute, and while the windshield’s new laid-back profile was an improvement, air flowing over the roof created lift at the back as it passed the new concave rear window. Like practically everyone else in the world, Passino knew of Plymouth’s plans to adapt the Daytona’s knife-edged nose and towering rear wing to its Road Runner, and to face the double threat presented by Chrysler’s winged warriors, he instructed Ford’s Special Design Center director Larry Shinoda to devise a homologation-special aero treatment for the 1970 Torino.

Passino’s idea was to reshape the Torino’s nose along the lines of the Le Mans-winning GT40. With that in mind, Shinoda and Special Vehicles Engineering designers Chuck Mountain and Ed Hall got to work penning a new front clip that, like the Talladega, could be grafted onto the stock Torino body. The new nose arced steeply from the windshield down to a slim chromed bumper that would be mere inches above the ground in lowered NASCAR configuration, and extended the Torino’s length by more than half a foot, promising to cut through the air with ease. The only other modification under consideration was to roll the rocker panels, as had been done to the production Talladega and Spoiler II, to allow NASCAR chassis builders to legally lower the cars one inch over the frame for a lower profile.

As Shinoda and his team refined the details of the new nose, a small number of fiberglass copies were sent to Ford’s NASCAR teams for real-world testing, which soon exposed the concept’s basic flaw: lack of aerodynamic balance. The new nose planted the front of the King Cobra to the pavement with some 200 pounds of downforce, but that very effect exacerbated the vacuum created by the concave backlight, causing dangerously destabilizing lift at the rear. Cale Yarborough apparently encountered the phenomenon during testing in a Boss 429-powered Torino, experiencing unpredictable handling in the corners and spinning the rear tires along the full length of the straights. Countering the problem would take either an illegally high rear spoiler or a Daytona-type wing, but even as Shinoda et al were considering solutions, other forces were at work that would sink the King Cobra for good. Does its frontend look like a Jensen-Healey to you?