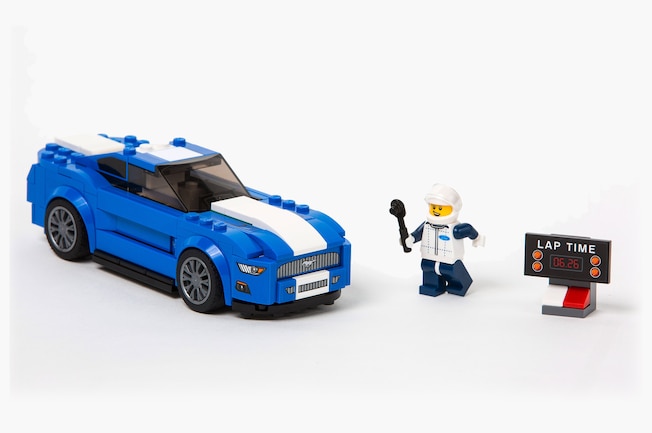 Does this sound like what might be ailing you? The chronic condition is known as Youthinbrainia, it’s where a male individual has a baby’s brain with an old man’s heart and is totally incapable of “growing up.” Identifying traits are if the subject of sporty cars is still more interesting than whether one’s kitchen is dated, or there isn’t enough sinks in the master bathroom to entertain guests. Should this match your symptoms unfortunately there isn’t a cure, but suffering can be decreased.

For the kid in all of us, Ford is working with LEGO Speed Champions to bring the excitement of the racetrack to people’s living rooms with the first-ever Mustang and F-150 Raptor LEGO sets. The Denmark-based LEGO team worked closely with Ford licensing and design teams throughout development and product design, collaborating on every detail down to the packaging and marketing materials.

The 185-piece Mustang kit includes a time board and race driver. The 664-piece F-150 Raptor set includes a well-equipped garage, trailer, a drag racing Christmas tree and Model A hot rod, plus a crew of Ford workers to ensure top-quality work.

“We are excited about the new LEGO Speed Champions sets based on iconic Ford vehicles,” said Jill Wilfert, vice president, licensing and entertainment, The LEGO Group. “Each LEGO Ford car tells a story and has infinite play possibilities. With these new sets, kids can play out their ultimate car fantasies. They are able to role play and become the LEGO mini-figure, stepping into the greatest cars on earth.”

Ford, LEGO Speed Champion sets will be available for purchase March 1 in LEGO stores and Toys ’R US nationwide.