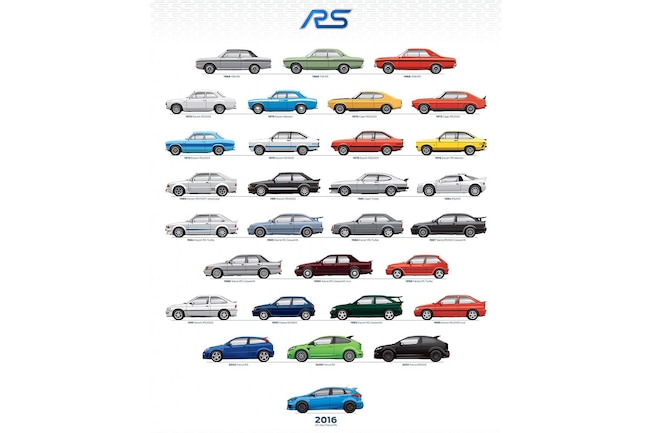 Short of remembering the white with a green side-stripe Lotus Cortina sold in the U.S. during the mid-60s it might come as a surprise to American Ford fans that for more than 40 years, Ford’s European wing has been taking mild-mannered econo-boxes no performance freak would ever look at twice at and transforming them into something quite worthy of attention.

In the vein of Shelby produced American Ford based models, the European RS branch has had free rein to ignore the constraints of everyday sell to the public safety-sedans and build exotic rally cars tuned to win. Among the factory backed modifications were 4-valve heads, turbocharging, all-wheel-drive, and race-tuned brakes and suspension.

Until now the U.S. market where the car has never been sold has been deprived of RS models, but that’s all about to change with the long awaited arrival of the new Ford Focus RS.

In 2001 the first-generation Focus RS made its debut at the Geneva motor show with cars driving off the assembly line in 2002, and then Focus RS production stopped with 1973 models. It wasn’t until 2009 that the Focus RS reappeared with 2010 bringing the end of the second generation Focus RS with the 345hp 2010 Focus RS500 — 500 signifying the production total for 2010.

For 2016 the Ford Focus RS has reappeared and this time on a world stage with the U.S. spec model arriving early springtime.