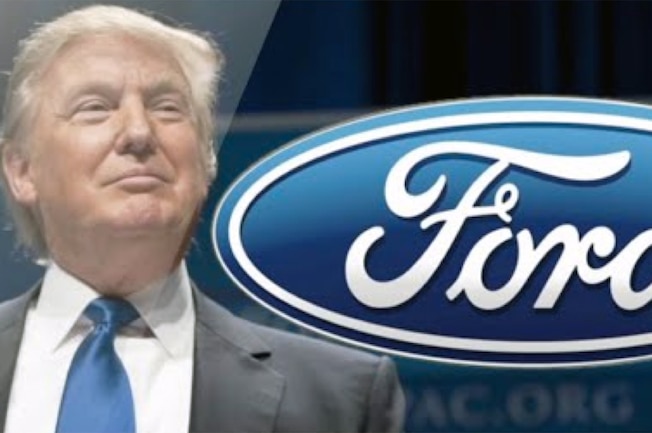 It was the Detroit News headline “Trump goes after Ford Motor Co.” not how long Hillary went overtime in the restroom that got our attention. Donald Trump made a whistle stop outside Grand Rapids, Michigan to take aim at Ford’s plans to expand production in Mexico. Trump promised if elected he would threaten manufacturers with big tariffs on imports to discourage building manufacturing plants south of the border.

Trump to Ford, “If you build that plant in Mexico, I’m going to charge you 35 percent on every car, truck part that you send into our country,” he said. “Every single one.” Trump went further saying he would engage in tough negotiations with car companies to build new plants in the US and Michigan. Political analysts say Trump’s proposal would at the very minimum require congressional approval and possibly violate NAFTA.

It would be interesting to know if Trump was aware of Ford’s history in Mexico, or the rest of the world for that matter. Already knowing Ford has been manufacturing and selling cars in Canada since 1904 the subject got us curious about Ford’s earliest beginnings in Mexico, so we did some digging.

The Ford Motor Company, S.A. de C.V. is the Mexican subsidiary of the Dearborn-based parent corporation. This subsidiary was the first automaker to establish production in Mexico, in 1925, and it remained the only automaker in Mexico until 1938. Although the Mexican market has remained relatively small, Ford Mexico's production of motor vehicles increased greatly in the 1980s, when it began turning out vehicles for export to the United States.

The Ford Motor Company, S.A. was incorporated in 1925 with capital of 500,000 pesos ($250,000). Adrian Rene Lajous, a Mexican of aristocratic parentage who was appointed managing director of the firm, knew President Plutarco Eliacute Calles personally and negotiated customs, tax, and railway freight-rate concessions from the government. Ford obtained a 50 percent rebate on duties for materials imported into Mexico. The company also was promised by the government that there would be no problems with the unions; however, a union was formed at the Ford factory as early as 1932. With regard to wages, Lajous suggested to Ford that it pay workers no more than $3 a day-a substantial sum at the time, since wages averaged only $1.25 a day.

Ford's first plant was located in a rented warehouse in the San Lazaro neighborhood of Mexico City. It had a total of 250 employees but assembled only 50 vehicles, using U.S.-made parts. Many of these were Model As, which replaced the Model T in 1928. In 1932 the company built a new assembly plant in the La Villa neighborhood. This factory had the capacity to turn out 100 autos a day-far beyond the realities of the Mexican market, even though Ford established a credit company to finance sales. The factory operated only two to three days a week, and a second daily shift was not added until nearly the end of the decade. Ford was the only auto manufacturer in Mexico until 1938, when General Motors opened a plant.

Of interest to both Ford and Twilight Zone fans Ford was a major sponsor for the entirety of the show’s run debuting October 2, 1959 until it ended in 1964 with Ford vehicles of historical interest appearing in almost every episode.