Get an EcoBoost in a Brand-New, Classic Shelby Mustang 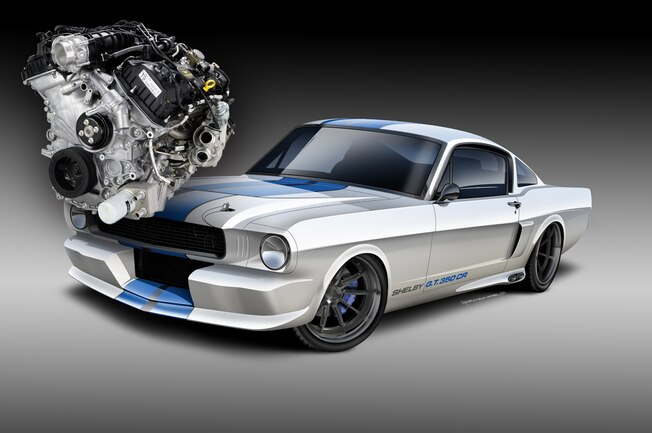 We’ve done stories on several of the cars that have come from Classic Recreations in Yukon, Oklahoma, and often discussed their ties to Shelby American as the only licensed and factory authorized builder of Shelby Mustang continuation cars. The company is stepping up its game again by offering a 3.5L EcoBoost twin-turbo engine in their 1966 GT350CR and 1967 GT500CR cars, as well as making available a four-cylinder EcoBoost drivetrain in their cars going to the Chinese market (where fuel costs and displacement taxes make the V8 engine prohibitively expensive). The four-cylinder version is also available in the U.S. if the customer wants it.

Before you poo-poo the idea of a V6 or four-cylinder in a classic Shelby, remember that one of Carroll’s most successful cars in later years was the turbocharged four-cylinder Chrysler Shelby GLHS, which Shelby named because, in his words, it “goes like hell.” We’re sure that with a lightweight V6 or four under the hood, the new CR Shelbys will also go like hell.

The 3.5L twin turbocharged V6 EcoBoost comes from the factory with 365 horsepower and 420 lb-ft of torque, thanks to high-pressure direct fuel injection, variable cam timing, forged internals and dual water-cooled Honeywell/Garrett GT15 turbochargers. Thanks to all-aluminum construction, the engine offers a substantial weight reduction compared to the iron-block V8 originally equipped in the car. The combination of a virtually flat torque curve and light weight along with the modern suspension options that CR has always offered will make this one of the best handling muscle cars ever made. For those seeking more power (and who isn’t?), the 3.5 can be tuned and equipped with larger turbos to produce over 600 horsepower while maintaining reliability.

“For years we have proudly hand-built the only officially licensed Shelby Mustang continuation cars in the world, but that doesn’t mean we are stuck in the past,” said Classic Recreations owner Jason Engel. “Our clients come from all over the world and they expect the very best—they want the looks of a classic Shelby, with the performance and reliability of a modern sports car. We can now give customers who want a lightweight but extremely smooth and powerful vehicle the 3.5L option, which is similar to the powertrain in the upcoming Ford GT, and we now have an excellent option for our Chinese customers with the EcoBoost 2.0L. It’s powerful, light and can be serviced at any Ford dealer worldwide.”

Both EcoBoost models will be available with either standard or automatic transmissions, and the full line of V8 engines—including Coyote and Windsor models ranging from 420 to over 1,000 horsepower—will still be available as well. For more information on CR Supercars, visit www.crsupercars.com or stay connected socially on Facebook, Twitter and Instagram.