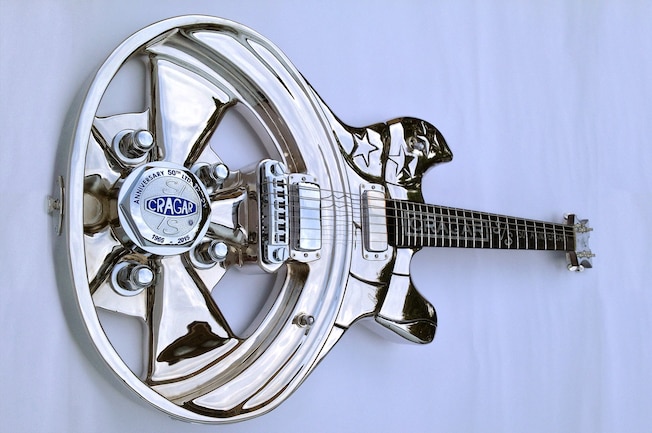 The famous Cragar S/S wheel turns 50 years old in 2015 and what better way to celebrate than to build a wicked guitar based off of this timeless wheel design!

“The Cragar S/S wheel was built for the American muscle car and symbolizes iconic style, performance and speed,” said Laren Harmon, Executive Vice President of Sales, The Carlstar Group. “For us, combining rock and roll with American muscle cars represents the perfect way to celebrate the 50th anniversary.”

Cragar Wheels has documented the guitar’s creation on its Facebook page. You can visit www.facebook.com/cragarwheels and see the process of McSwain’s guitar creation. Fans had a chance to register to win the exclusive instrument and Atlanta, Georgia resident Sherri Hudgins’ name was picked from over 16,000 entries.

The 50th Anniversary Cragar wheel center caps are selling fast. You can order yours at any Cragar dealer for the Cragar S/S under PN 09099.

McSwain envisioned the Cragar S/S wheel fused with a guitar. While using the S/S wheel as inspiration, McSwain sketched a design and went to work carving out of wood an exact replica of the Cragar S/S wheel at the base of the guitar. The guitar’s most important element is a bright rhodium plated finish on the wood that results in a chrome plated look. McSwain’s final touches include Cragar lug nuts, real Cragar valve stem caps used for the volume and switch knobs, and the 50th Anniversary Cragar S/S wheel cap. Once complete, McSwain plugged in the guitar to test it out.

“You never really know what a finished guitar will sound like until you fire up the amp and take it for a test drive. I plugged the Cragar guitar in and it blew me away! This guitar begs to be the conduit for some serious rock n roll,” McSwain said. For more information about Stephen McSwain, go to www.mcswainguitars.com.