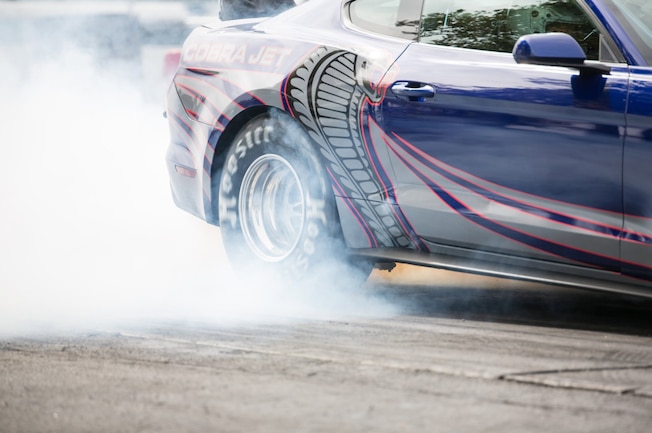 While it is extremely hard to get past the Triple Yellow Ford GT on display in the main Ford display area of the 2015 SEMA show, the big news for those that don’t have $400,000 for a new GT is that Ford Performance debuted the 2016 Mustang Cobra Jet drag car this week as well. The 2016 Cobra Jet, featuring a supercharged 5.0L DOHC engine is good for low 8-second elapsed times we’re told. Only 50 are being built—25 in blue and 25 in white. Retail is right around $100K for a factory turn-key race car legal for NHRA Stock and Super Stock racing and most likely they’ll all be sold by the end of the year.

Ford Performance wants everyone to share in the Cobra Jet news and has launched a few marketing items we really dig. First off was the cut-out and fold paper Cobra Jet you can place on your desk, but today Ford Performance announced a really sweet “burnout” ringtone you can download and add to your smart phone. Get the download HERE and use it for a ring tone, text alert, or whatever you like and you’ll be the envy of your Mustang friends!