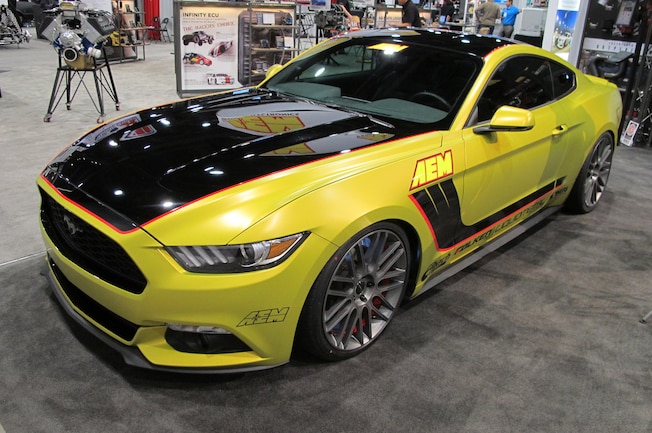 When exhibiting at the annual SEMA show, you can always count on wild rides to showcase the latest and greatest products, and at this year’s monster gala, many of those cars came in the form of the 2.3L EcoBoost Mustang.

AEM Performance Electronics was in full force at this year with their wrapped S550 EcoBoost. Aside from its killer looks, AEM’s latest electronic products were well represented. Giving us the full walk around tour of their Bitter Yellow S550 was AEM’s Brand Manager, Ross Berlanga.

AEM’s Mustang is also equipped with the AEM Electronic Water/Methanol injection that bolts right up to the intake system with no drilling required. Also used are the AEM Electronic gauges, which monitors the boost, water, and water/methanol control.

In the tri-pod of gauges installed on the interior, just above the shifter, the center gauge was the newest product debuted at this SEMA show – the X-Series Wideband UEGO AFR Controller Gauge featuring X-Digital Technology.

“To help maximize our horsepower, we have a stainless steel cat-back exhaust system, which features smaller mufflers to really enhance the horsepower on our 2.3L Mustang, especially when it’s in normal drive mode. It has better throttle response, but when Sport Mode is engaged, there’s an animal that’s released. It’s amazing how much horsepower this little four-cylinder is putting down.”

"With our intake system we are getting 12 horsepower, and currently testing our all-new Charge Pipes,” Ross explained. “Add in the water methanol injection system and we are making a significant amount of power over the factory numbers."

To help get the horsepower to the ground, AEM installed the Eibach Pro-Street S coilover spring and damper package, including sway bars. “All together, it really handles and performs well,” said Ross. “We just couldn’t ask for anything more.”

Also installed on the S550 is a custom set of SOT-series Liquid Metal wheels in a custom charcoal matte grey metallic finish wrapped with Falken Azenis FK453 rubber. The wheels feature red accents behind the spokes to perfectly compliment the red accent lines on the car.

The car features a unique color thanks to the 3M 1080 film series in Satin Bitter Yellow. “We wanted to pay homage to the Mustang’s traditional Americana roots and our hot rod heritage, but at the same time, we wanted to give back to what AEM is good at and that’s our sport compact and tuner audience. That’s why we chose the 2.3L EcoBoost platform for SEMA.” This EcoBoost is a perfect example of the good things to come, and we wouldn’t have it any other way.