As if we needed more reasons to run to Ringbrother’s SEMA booths. 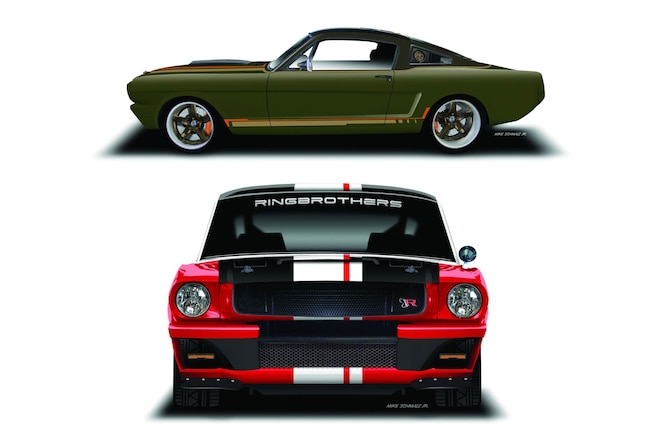 Ringbrothers isn’t a stranger to HOT ROD, with the company’s incredible innovation in custom car building that melds old-school iron with new-school materials and design in a truly unified package. While the world lamented that Pro Touring had subsided, the Ringbrothers sent a pile driver right through the custom world when it arrived.

This year, we are going to see two big project cars from the company, along with a sneak peek at a future Ringbrothers project car.

First is the completion of a project car that we saw back in 2013 at SEMA (see our gallery below of in-progress shots from 2013), now known as Espionage. The body is an all-carbon “kit” that Ringbrothers builds that replaces every bit of sheetmetal attached to the original steel Mustang unibody with carbon-fiber panels, eliminating as much weight from the basic body-in-white as possible. Named for its BASF Spy Green paint scheme, Espionage will bring 959 hp to the party, thanks to a Whipple-supercharged, 416ci Wegner Motorsports engine. Power is routed through a Tremec six-speed before being diverted to the rear wheels via a Detroit Speed-built Ford 9-inch. Wheels are, of course, custom HRE pieces.

We’re told the interior will also be packed with Recaro seats and Racepak gauges, but you can expect the real treat will be from Ringbrothers integration of those elements into the overall aesthetic of what is probably the world’s most radical spy car, though stealth might be a bit difficult with all the attention Ringbrothers attracts.

First is SPLITR, a 1965 Ford Mustang fastback for the Flowmaster booth at SEMA. This is what an early Mustang race car should look like, with a familiar but aggressive stance that turns your standard secretary’s car into a truly muscular shape worthy of the Mustang name. A 427ci Ford Performance motor will handle the power duties, while a Flowmaster exhaust system helps the monster V8 breath. You can find SPLITR at the Flowmaster booth during SEMA, and it should be easy to spot with the BASF Ford Race Red paint and massive HRE wheels flanking each corner.

Keep an eye out at SEMA for HOT ROD, as we’ll be covering the action from the floor to bring you the newest in aftermarket awesomeness.