Acid Alert! Number One Cause of R-134a Charged A/C Disasters is Failure to Properly Extract Moisture 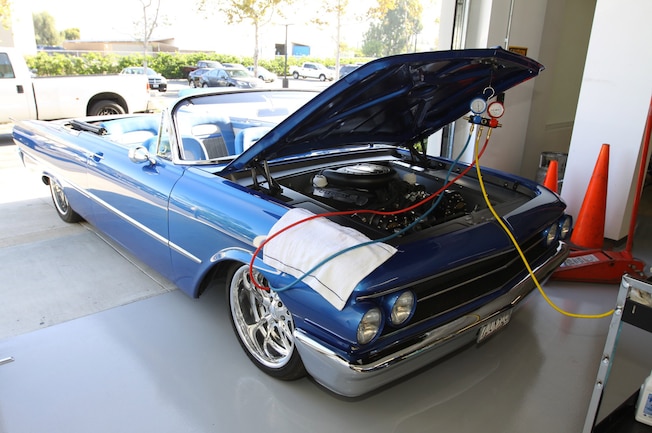 To most guys installing or working on a car’s A/C system it’s one of those black arts like installing a wiring harness, or rebuilding an automatic transmission. If you’re feeling a little gun shy from past bad results doing A/C work, here’s a tip we can share that will make a big difference your next time out.

Our subject vehicle is our sister brand Street Rodder magazine’s 2015 Road Tour car, a 1961 Ford Sunliner with a double-blown Ford Performance 427 and ice-cold Vintage Air Gen IV Magnum air-conditioning. In this instance I’m not just another motor-journalist blowing hot air about how well a product works; I got a chance to drive this car last June in 100-degree plus heat from Arizona, through New Mexico into Colorado.

The key to getting things right from the very start is to completely evacuate (extract, vacuum) the system to eliminate moisture. From the very start means even a brand new air-conditioning system installation will have moisture present somewhere and can lead to problems in the future. Purity is a concern. Freon contaminated with moisture turns into an acid that will erode and destroy air-conditioning components. At the very least moisture present reduces the A/C system’s ability to chill air.

Not my vacation photos of the Sunliner at the Arizona – New Mexico border, but the images taken in TEN’s Santa Ana, California facility, are of tech center manager Jason Scudellari preparing the A/C after work was done that required recharging R-134a. Jason said after the A/C plumbing was buttoned up he vacuumed the system for around 45 minutes to an hour. Next he shut off the vacuum pump and made the sure system held vacuum for at least fifteen minutes. After ensuring the system held, he recharged the A/C until he had the proper gauge readings.

Now some might wonder why we would run an air-conditioning tech tip as winter is fast approaching, and its true out here in the west we use A/C all year long, but here’s an interesting fact. During the winter a car’s air-conditioning plays a vital part removing humidity helping the defroster greatly to defog the windshield and windows.