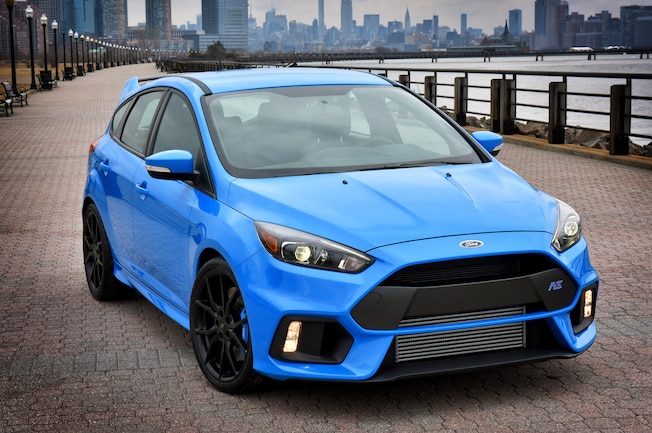 The all-new 2016 Ford Focus RS is making a big splash in the Hot Hatch market with plenty of performance to dominate the field. The new Focus RS sprints from 0-62 mph in just 4.7 seconds and reaches a maximum speed of 165 mph. 0-62 you ask – why not use the standard 0-60 litmus test we’re accustomed to in the states? That’s because it translates over to 0-100 Km/h which is important when you realize that this car isn’t just meant to dominate the roads of America, but also those of the rest of the world and now, you can actually build your very own digital Focus RS on Ford’s website.

The Focus RS is the fastest model ever produced by Ford but make no mistake, it’s not a second rate econo-box. This baby packs a mean punch with a Ford Performance All-Wheel Drive as well as a projected 350hp and 350 lb-ft of torque from its 2.3L EcoBoost engine. On top of that, the Focus RS also offers multiple driving modes, including an industry-first Drift Mode as well as Launch Control. The all-new 2016 Focus RS optimizes acceleration by introducing launch control technology to a Ford RS model for the first time. Focus RS also debuts new Ford Performance All-Wheel Drive with Dynamic Torque Vectoring – for outstanding traction and grip with dynamic agility and cornering speed.

The new 2.3-liter EcoBoost engine shares its fundamental structure with the all-aluminum four-cylinder EcoBoost in the all-new Ford Mustang. The engine is significantly upgraded to improve power by more than 10 percent. It features a new low-inertia twin-scroll turbocharger with larger compressor, enhanced air intake design, and a large-bore high-performance exhaust.

To achieve maximum acceleration through the gears, a performance shift light in the instrument cluster alerts the driver when approaching the optimum upshift point of 5,900 rpm, and flashes if the engine hits the 6,800-rpm limit.

As the 30th car to wear the legendary RS badge, the Focus RS will be built in Saarlouis, Germany, and is one of 12 new performance vehicles Ford will bring to customers globally through 2020 as part of a new era of Ford performance.

“The all-new Focus RS will bring the legendary nameplate to a new generation of global customers for the first time,” said Dave Pericak, director, Ford Performance. “Focus RS delivers stunning performance and innovative technology at a price that will make both enthusiast consumers and premium automakers look twice.”

There’s no question the new Focus RS is going to be one heck of a thrill ride and with only a handful of colors available such as Frozen White, Stealth Gray, Shadow Black and of course, the unbelievably cool Nitrous Blue – it’s sure to be a hot seller. Customer deliveries of the high-performance hatchback will begin in North America in the spring of 2016 and if you want to get your hands on one in the United States, the RS model will start at $36,005.