Can the new 3.5L EcoBoost V6 Win Over Enthusiasts? 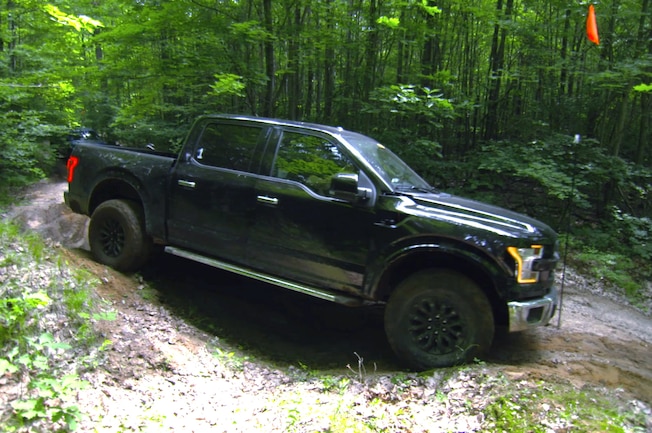 Ford Performance engineers have been busy on some undisclosed trails in Northern Michigan, putting the Ford F-150 Raptor prototype to the test on steep hills, ruts, bumps and even water crossings. Their goal is to make sure the 2017 F-150 Raptor has what it takes to conquer the dirt when it is finally released to the public in late 2016. The all-new Raptor is said to be able to tackle off-road terrain better than the previous generation F-150 SVT Raptor.

While this is an early engineering prototype that features some parts from the 2017 Raptor, the truck is still able to climb tight two track trails with ease. Much of this can be attributed to the improved ground clearance on the 2017 Raptor thanks to the new 3-inch diameter FOX Racing Shox that feature unique internal bypass valving to soak up the harsh terrain and large bumps. The shocks damp and stiffen suspension travel over rough terrain while the all-new four-wheel-drive, torque-on-demand transfer case improve the Raptor’s trail performance. The new system manages power distribution between the front and rear axles and combines the best attributes of clutch-driven, on-demand all-wheel-drive with a durable, mechanical-locking four-wheel drive system.

We are huge fans of the Raptor as both a performance truck as well as the ultimate street-legal off-road beast, but watching this video makes us really miss the old 411hp 6.2L V8 in the previous generation Raptor. Sure the new 3.5L EcoBoost V6 is said to have more power than the outgoing model, 450hp to be exact – but there really seems to be something missing on the Raptor prototype. That animalistic V8 growl that thundered throughout and reassured you that you had enough power to burn up the desert two tracks with ease. That is of course, if the suspension could keep up or you didn’t run out of talent before reaching the limits.

While we’re not knocking the new 3.5L EcoBoost V6, it just doesn’t sound natural in a big burly off-road truck. Maybe the exhaust note will get a little throatier and meaner as we approach the launch date in late 2016 but for now, the exhaust note is relatively tame. Who knows, maybe a 5.0L EcoBoost V8 option will show up in the next generation Raptor? All we can say is that we’re really going to miss the deep menacing sound of the 6.2L V8 putting a hurt on the dirt.