Fords in Forza 6: Forza Motorsport 6 is coming September 15, 2015 and we check out the in-game licensed Ford vehicles 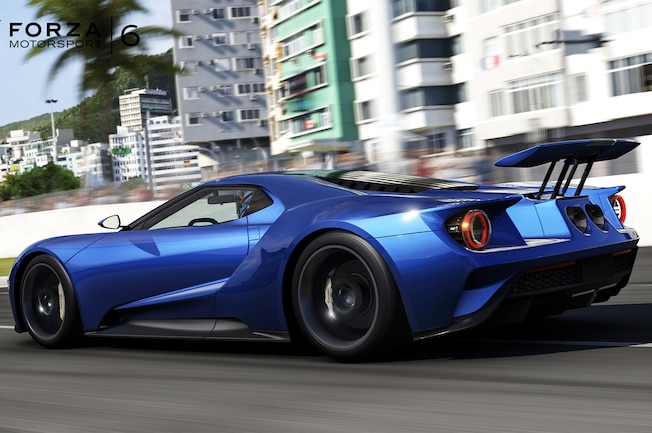 As we get closer to the much anticipated launch of Microsoft’s Forza Motorsport 6 for Xbox One and the Forza Motorsport 6 Limited Edition game console we have been keeping a keen eye on the licensed Ford vehicle content you’ll find in this new game. Ford and Ford Performance both worked closely with Microsoft and Turn 10 on the various Fords in-game, including the game’s cover car and the car that inspired the Limited Edition console—the 2017 Ford GT supercar. The complete and current Ford Performance lineup will be available to race in-game when the title launches on September 15th, 2015.

Besides the latest and greatest performance Fords like the 2016 Shelby GT350R, there are nearly four dozen licensed Ford vehicles found in-game that you can race with. From a 1940 Deluxe Coupe to the as-yet unreleased 2017 Ford GT supercar, your choices of Blue Oval chariot are vast. Vintage fans will love the early Mustangs of course, plus there are those track-ready machines from Shelby like the Daytona Coupe and 427 Cobra. Modern SVT products like all three Cobra R Mustangs, modern GT500 Mustangs, and more are available too. Some will require completing a certain task, skill, or driving event, while others will be immediately available. All cars will feature full working interiors, opening doors, realistic damage modeling, and the ability for customization.

The Limited Edition Forza Motorsport 6 Xbox One console features Ford GT themed color, graphics, and even a simulated engine start/stop button with sound effects to power the console.
Probably one of our favorite vintage Mustangs in Forza Motorsport 6 is the 1969 Mustang Boss 302. Right at home on any track, tackling Watkins Glen or Laguna Seca, the Boss is a great way to turn back time.

While we’re drooling over all of the great licensed Ford vehicles, we can’t ignore the driving dynamics that will test each of these cars. Twenty six real world racing locales, including 10 new tracks never before captured for the Forza franchise, will be available. Drive the Formula Ford EcoBoost 200 at Daytona, or perhaps you’d rather take the 1969 Mustang Boss 302 around Watkins Glen. Either way all of your favorite tracks like Road Atlanta, Sebring, Sonoma, Limerock, Silverstone, and more, are there for you to master, including night time and wet weather racing in 1080p HD at 60 frames per second.

So while there are over 400 cars that you can drive in-game, it’s the Fords we’re excited about here. Check out the list below and tell us what your favorite ride is that you’d race with in the new Forza Motorsport 6 coming September 15th, 2015.

Of course the new S550 Mustang is on deck too with a couple of different iterations. Since most of us will never have the pleasure of owning the new Shelby GT350R you can get behind the wheel of one in Forza Motorsport 6.
Another great vintage ride, the Mercury Cougar Eliminator, is available for those that enjoy the vintage side of things.
The new Ford GT is part of a small handful of new Ford Performance vehicles coming to a dealer near you that you can drive in-game, which include the 2017 Raptor, 2016 Focus RS, and others.