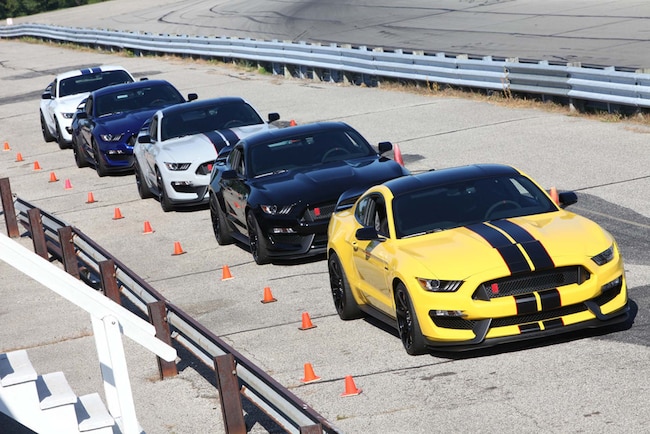 First announced in November 2014 at the Los Angeles Auto Show, HOT ROD has been anxiously waiting and waiting for some seat time in the road racin’ Ford Shelby Mustang GT350-R with its much publicized flat-plane-crank V8. Ford’s scheduled release in 2015 keeps getting pushed back, and then back again, and the 2015 model year is waning, and still no GT350-R until now.

The Mustang GT350-R does actually exist! “The Shelby GT350R Mustang is a no-compromise car in the pursuit of maximum track capability,” said Raj Nair, Ford group vice president, Global Product Development. “It is a thoroughbred street car making use of technology and ingenuity to deliver performance few enthusiasts have ever experienced.”

Ford is obviously overcoming some technological hiccups associated with the big-cube, flat-plane engines, the most powerful naturally aspirated engine Ford has ever produced, to bring to market the quickest production Mustang track car ever available. And besides the engine technology, the GT350-R brings other firsts to the streets, like lightweight carbon fiber wheels, which are standard on Shelby GT350-R, making Ford the first major automaker to introduce this innovative wheel technology as standard equipment.

These images and vid were shot just on July 28, 2015 at Ford’s ride event at Grattan Raceway in Belding, Michigan, where a half-dozen of the Mustangs were made available for a quick spin around the Grattan track. Check out the sights and thundering sounds that only a 5.2L flat-plane-crank engine can emanate, and you can be sure that when these special Shelby Mustangs become available for some long-range seat time we will be the first to showcase all the greatness that is the Mustang 350GT-R.