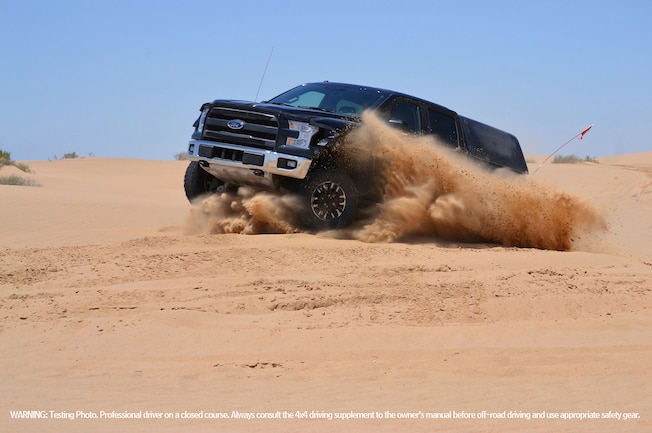 The 2017 Ford F-150 Raptor is poised to be Ford’s toughest, smartest and most capable off-road truck ever built but filling the shoes that the previous generation Ford SVT Raptor leaves behind is not an easy task. Naturally, the Blue Oval isn’t ready to let naysayers have the last word so they recently took some of their Raptor test mules out to the desert to prove that the all-new Raptor has what it takes to rule the roost in the off-road world.

The next-generation Raptor test mules racked up more than 1,000 miles of brutal desert testing in the southwestern United States. The testing course consisted of over 1,028 miles of desert trails designed to put the truck in situations similar to the treacherous sections of the race course in Baja California, Mexico.

The 66-mile route features a wide range of surfaces that included fast sandy washes, deep-rutted silt beds that swallow up tires and horsepower, steep sandy hill climbs and slow technical crawling sections through tight trenches. During the testing, the Raptor test mules topped speeds of 100 mph in high-speed sections while the gnarly slow speed sections were conquered at 10 mph with an average overall speed of approximately 50 mph.

According to Ford, the 2017 Ford F-150 Raptor is 25 percent faster than the current truck based on the lap times that were put up. At the end of each lap, the all-new Raptor roared through a tabletop jump that consisted of a steep ramp up to a two-foot plateau followed by a step-off back to level ground. The test mule trucks that were tested were early build prototypes made from a mix of 2015 F-150 Raptor and 2017 F-150 Raptor components.

Ford pushes all of their Built Ford Tough trucks to the limits and the new Raptor was pushed harder in a few days than it will be pushed over the lifetime of a typical vehicle – far exceeding what an owner would ever to on the trail. The Raptor is built to dominate the off-road pickup segment and it is leaps and bounds ahead of the competition, from its 450hp EcoBoost V6 to the monstrous FOX Racing Shox 3.0-inch internal bypass shocks that soak up the roughest terrain the desert can dish out.

Ford says they aren’t done testing the next-generation Raptor and will continue pushing the limits of this all new off-road beast well into 2016 before the 2017 F-150 Raptor goes on sale in the fall of 2016.