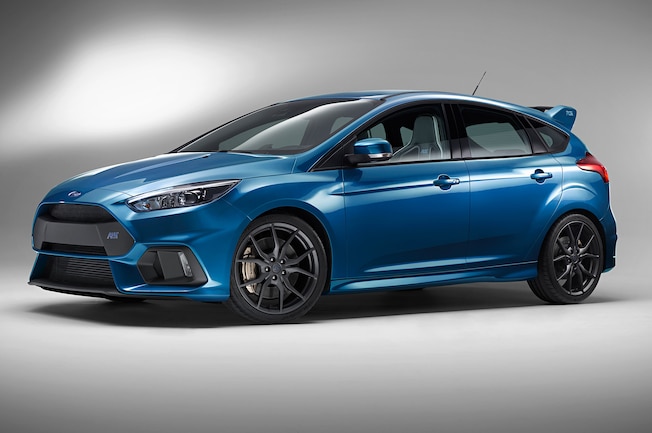 This isn’t your run of the mill econobox; it’s a full-fledged Ford Performance-developed model that features a Ford Performance All-Wheel Drive system with Dynamic Torque Vectoring. The innovative system helps delivers a new level of handling capability that combines outstanding traction and grip with unmatched agility and cornering speed.

Ford will demonstrate the performance of the all-new Focus RS to the public for the first time at the 2015 Goodwood Festival of Speed, U.K., where Ken Block, Gymkhana and World Rallycross star, will tackle the famous Hillclimb at the wheel of a prototype car.

“We promised enthusiasts a serious driving machine and, with 350 PS* under the hood that is exactly what we will deliver,” said Dave Pericak, global director, Ford Performance. “The stunning pace and innovative technology of the all-new Focus RS place it head-to-head with performance models from luxury and exotic marques, and it’s ready for the challenge.”

The increased power in the Focus RS is made possible by a new low-inertia twin-scroll turbocharger with a larger compressor that delivers significantly greater air flow. A much bigger intercooler helps maximize the air charge density while a less restrictive intake design allows the engine to breathe freely. A large-bore high performance exhaust system with an electronically controlled valve in the tailpipe helps optimize the balance of back pressure and noise output to make the Focus RS roar down the road while also keeping the signature RS gurgle and pop.

The cylinder head is made from an upgraded alloy material that is capable of withstanding high temperatures while the cylinder block employs stronger high-tensile cast iron liners. Since the Focus RS will likely be driven hard and fast, the engine cooling was built to take the abuse. The Ford engineers created additional space within the front of the vehicle to house a significantly larger radiator pack – the biggest ever fitted to a Focus – which provides the level of cooling demanded for intense circuit driving.

Of course it’s not all about peak horsepower figures when it comes to building a fast car so naturally the Focus RS was fine tuned to ensure that the engine delivered excellent low-end responsiveness as well as a powerful mid-range that could pull it through the corners with ease. Make no mistake, the 2.3L EcoBoost in the Focus RS will scream all the way up to a redline of 6,800 rpm. The torque band gives you plenty of grunt, delivering a maximum of 324 lb-ft of torque but if you want a little more, the Focus RS can put out an extra 23 lb-ft of torque (347 lb-ft ) for up to 15 seconds on transient overboost during hard acceleration.

The all-new Ford Focus RS, one of the 12 new performance vehicles Ford will offer through 2020 globally is the third generation of Focus RS cars and is the 30th car to wear the legendary RS badge. While the car will be built in Saarlouis, Germany, it is sure to attract a worldwide audience of hot hatch enthusiasts and will be available for delivery to European customers beginning in early 2016.

*Unit of measurement used in Germany.

Next-Generation Ford Focus to Debut in Europe This April

Ford plans to show the redesigned Ford Focus in Europe at a stand-alone event in April, check out the latest on the next Focus here.