We take the Supercharged 2015 Shelby GT for a quick spin to see what it’s all about! 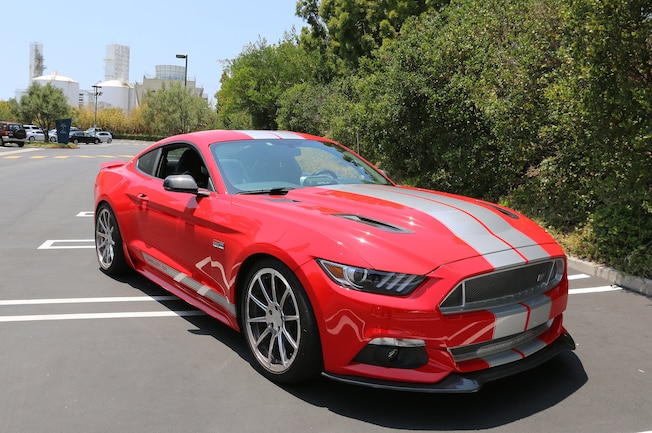 Shelby American is a name that is famous for power and performance in the automotive world thanks to its long historic racing pedigree in the early 1960s to present. Many Mustangs have rolled out of the Shelby’s doors to conquer both the street and track and for 2015, they are pulling out the stops with their all-new S550 Shelby GT Mustang. The S550 Mustang also features a fully independent rear suspension on its entire lineup, which has all corner carving enthusiasts excited.

While the new S550 platform is a huge improvement over the previous generation when it comes to gripping through the curves and making use of all the power, Shelby American knew they could make the 2015 Ford Mustang 5.0 GT even better. Naturally, they did just that and built what you could honestly call a track ready daily driver, the 2015 Shelby GT—a 650hp supercharged beast that will shove you into the seat if you mash on the throttle or cruise all day long on the highway without a hitch.

Luckily for us, the folks at Shelby American just happened to stop by our L.A. offices to give us an exclusive first look at the all-new Shelby GT. Naturally we brought along our camera and snapped away at 2015 Shelby GT Mustang from just about every angle. It's definitely a head turner that also packs plenty of power and performance to go along with it.

The looks of the Shelby GT are drop dead gorgeous and the S550s finely sculpted body lines are accented nicely by all the true carbon fiber panels such as the tail light panel, rear diffuser, spoilers, rocker panels, splitter and even the functional heat extractors on the carbon fiber hood that is painted to match the car.

The 2015 Shelby GT Mustang starts off with the very same 5.0L Coyote V8 from the Mustang GT but the similarities end there as the Shelby GT features a Ford Performance Racing Parts 2.3L TVS supercharger that bumps the power output all the way up to 650hp. You'll also notice the unique Shelby aluminum caps on the overflow tanks that give the Shelby GT a little more sophistication under the hood. A Shelby cold air intake ensures the supercharged Coyote gets an adequate supply of air to let all 650 horses loose at a moment’s notice while a set of 3.73 gears allow the Shelby GT to get moving in a hurry.

To help the Shelby GT grip through the curves while laying down all its newfound power, a set of Shelby specific 20-inch Weld Racing forged aluminum wheels wrapped I sticky Michelin rubber are used. A set of 6-piston Wilwood calipers up front and 4-piston Wilwood calipers out back help reel in this pony when jumping on the binders. A brake duct kit ensures the brakes stay cool during spirited driving at the track while adjustable rear control arms and camber/caster plates allow the suspension to be finely tuned for any situation.

The inside of the 2015 Shelby GT is just as impressive as the exterior with plenty of unique touches such as the Katzkin interior, Recaro bucket seats, Shelby 3-gauge dash pod as well as a Ford Performance Racing Parts Short Throw Shifter to help you bang through the gears with ease.

So how does the 2015 Shelby GT handle? Lucky for us, we got the opportunity to take the car for a spin and we got to experience just what this 650hp beast is all about. While it feels incredibly fast, you aren’t constantly worried about giving it too much throttle and spinning out. The traction control seems to keep it tracking straight when you crack open the throttle and the sway bars help it hug the curves, even under power.

Despite having enough power to bury the speedometer quickly, the Shelby GT feels very refined and composed. You could easily daily drive it or take a road trip in one without going deaf from a loud exhaust drone. The Borla exhaust gives the supercharged 5.0L Coyote an aggressive tone that harks back to the early days of the Shelby Mustangs that just simply can’t be beat.

The suspension is a little on the stiff side but that’s to be expected in a car that is setup for the track. Trust us, you wouldn’t want a floaty suspension with 650hp on tap. Speaking of suspension, Shelby has really done their homework with the Shelby GT as we were able to carve around more than a few corners at speed while the car gripped the tarmac and took it like a champ.

Check out the video to see why our first impressions of the 2015 Shelby GT left us with a grin from ear to ear! 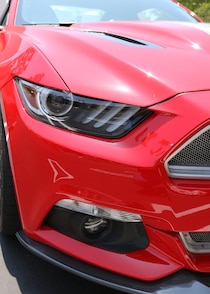 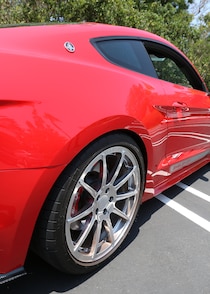 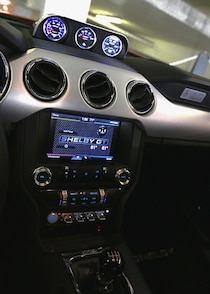 While sitting at a red light, this gentleman in what is likely one of the cleanest Fox body Mustang LX hatchbacks we’ve seen in awhile gave us a thumbs up. As luck would have it, he also happens to own a Shelby Super Snake Mustang.