In 1969, Ford Motor Co. built an experimental, mid-engine version of the Boss 429 Mustang. Here's the story behind this intriguing machine. 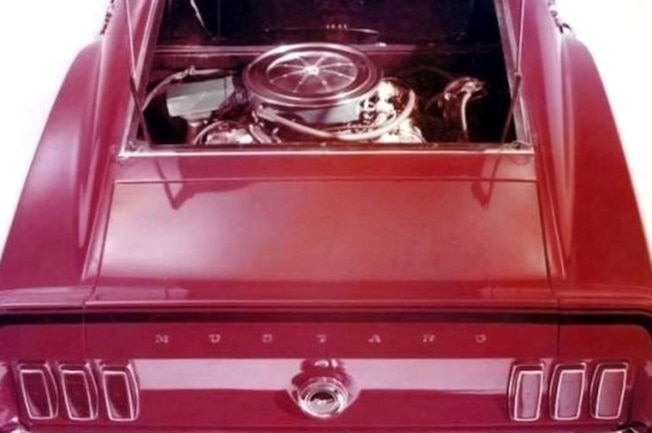 Known internally as the LID Mustang, this unique project was the work of Ford Motor Company's Special Vehicles section and Kar Kraft, its private Detroit-area engineering facility. (Kar Kraft was ostensibly an independent contractor but had only a single client: Ford.) The LID acronym was short for Low Investment Drivetrain—an experiment to produce a mid-engine Mustang on a budget. Instead of an exotic European-style transaxle like, say, the Ford GT, this project used as many Ford production components as possible.

One well-known issue with the stock Boss 429 (1,358 examples produced in 1969-70) was its nose-heavy weight distribution, the result of wedging the big 429 cubic-inch 385-series V8, complete with iron block and iron hemi heads, between the front shock towers of a lightweight Mustang coupe. To address this shortcoming, the LID concept simply relocated the powertrain from the front to the rear of the chassis. In a nutshell, here’s how it was done.

A bone-stock Boss 429 engine and Ford C6 automatic transmission were turned around backward and installed in a removable rear subframe, with the engine centered directly over the rear axle. A unique transfer case, built by or for FoMoCo especially for this project, re-directed the output 180 degrees and sent it to a 9-inch Ford rear axle, which was converted to independent suspension with fabricated half shafts and u-joints. A specially cast axle housing incorporated an engine mount and pickup points for the Koni coilover shocks and rear control arms. Simple and straightforward, the drop-out drivetrain module was obviously devised with assembly-line production in mind.
There was little about the LID Mustang’s outside appearance to give away the revised engine location—but interestingly, the exterior was trimmed out not as a Boss 429 but as a Mach I. The stamped steel wheels, eight inches wide at the rear and six inches in the front, were reverse offset (Toronado style, in other words) to maintain stock track width, then camouflaged with full wheel covers taken from the Lincoln parts bin. The space formerly occupied by the rear seat was upholstered in black carpeting to match the rest of the cabin. Meanwhile, the battery, radiator, and air-conditioning condenser were located up front in the former engine compartment, with electric fans to provide cooling.
To allow service access to the big Boss V8 out back, the fastback rear glass was replaced with a Sports Slat louver assembly equipped with hinges and folding struts. The LID project accomplished its primary goal perfectly: The Boss 429's weight distribution was improved from 60/40 percent front bias to 40/60 rear. But except for a near-elimination of wheelspin, the Ford engineers discovered there was no meaningful improvement in performance. With no justification for the car’s production, the LID Mustang experiment was effectively ended.

So what became of the one and only mid-engine Boss 429? A short article in the December 1970 issue of Motor Trend indicated that the car was at that point headed for the shredder. However, some old timers at Ford doubt that story. As they remember it, the paperwork procedure for the disposal of prototype vehicles was notoriously lax. The car simply could have disappeared, they say, without management being any the wiser. One source claims the LID Mustang was stolen; another says the car languished on a scrap lot at the Dearborn Proving Grounds for a year or two, then just vanished. Could the one-of-one mid-engine Mustang be stashed away in a home garage in Dearborn or Allen Park, awaiting its return to the light of day? Maybe someday we will know.